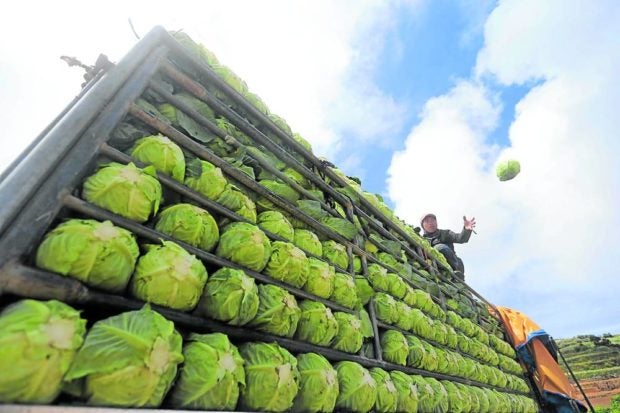 CABBAGE TOSS A farmer in Atok, Benguet, loads newly harvested cabbages onto a truck that will leave for the vegetable trading post in La Trinidad town, the provincial capital. Agriculture workers are among groups seeking aid from the government so they can cope with high fuel prices. —REM ZAMORA

MANILA, Philippines — Saying the P200 monthly cash subsidy for low-income families was “too small,” President Rodrigo Duterte on Monday directed the Department of Finance to raise this to P500.

The cash aid approved this month will be given to poor households to help them cope with rising prices of goods amid successive oil price hikes.

But critics have called the amount a pittance. Duterte himself said that P200 was not enough.

“It cannot sustain a family of three, even four, five. Those with the most number of children. They are the productive Filipinos for tomorrow, if not today,” he said in Malacañang during the signing of several legislative measures, as he directed Finance Secretary Carlos Dominguez III to raise the subsidy.

“I hope that this would go a long way really to help,” Duterte said.

But he also urged beneficiaries not to waste the cash assistance on activities like “e-sabong” or online cockfighting.

Still, Duterte said e-sabong must be allowed to continue because of the revenues it provides the government.

“My misgivings are the people behind e-sabong. You can pass a law making it transparent,” he said.

Meanwhile, agricultural groups on Monday claimed there was favoritism in the distribution of the P500-million fuel subsidy which began last week.

Furthermore, government data on corn farmers and fishers eligible for that assistance was inaccurate and lacked transparency, they said.

At an online briefing hosted by advocacy group Tugon Kabuhayan, Roger Navarro, president of the Philippine Maize Federation Inc., said the subsidy was given only to “people close to this governor or that mayor.”

He said the Registry System for Basic Sectors in Agriculture (RSBSA), which lists the beneficiaries for the subsidy allotted to farmers, “is not accurate. The accuracy of our RSBSA and the transparency are not that trustworthy.”

The Department of Agriculture said 158,730 corn farmers and fishers nationwide were expected to benefit from the subsidy, pegged at P3,000 each.

The farmers need that money as they use machinery for production, while fishers use motorized boats.

According to Navarro, the eligible farmers comprise less than 10 percent of the 850,000 farming families that are dependent on corn.

Regarding the P3,000 allocation, he said: “As the saying goes, a pauper can never be a chooser. We cannot demand because we are just given [a certain amount]. Just say thanks to what is given to you.”

Pablo Rosales, president of Pangisda Pilipinas, said, “[T]his is a big help for fishermen who are struggling right now. But we have to ensure that the assistance will be extended to the rightful beneficiaries.”