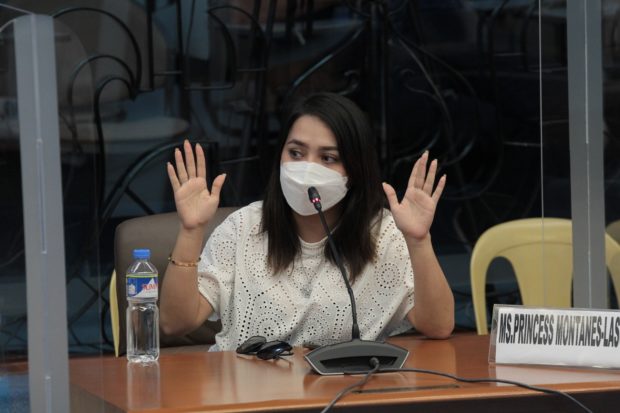 MANILA, Philippines — The kin of a missing online cockfighting “master agent” from Laguna came face to face on Monday with two police officers who they claimed as among those involved in the abduction of the e-sabong enthusiast.

Four women identified the two officers in their testimony before the Senate public order committee in the resumption of its inquiry into the disappearance of over 30 cockfight enthusiasts.

The women said the officers were among those who came to their house in San Pablo City in Laguna on the morning of Aug. 30, 2021, and took Ricardo Lasco, the e-sabong agent.

The police officers were quick to deny the accusation.

According to her, Paghangaan was the one who presented them with a supposed arrest warrant for her partner.

“When I reported it to the police I said I recognized his face. Then they showed me pictures. So I pointed him out. When I showed them, they all got nervous. Even my sibling got nervous,” Princess told senators in Filipino.

“We all gave them pictures. We identified him without any hesitation,” she added.

According to the Criminal Investigation and Detection Group (CIDG), Lasco was “kidnapped by more or less 10 armed men” in his house in San Pablo last August.

According to Princess, the men ransacked their house and took their jewelry, mobile phones, and a vault containing money.

Meanwhile, Princess’ cousin, Honey Lyn Sason, recalled someone from the group of men who kept on insisting that she open the vault in one of the rooms of the house.

Sen. Ronald “Bato” dela Rosa, the committee chairman, asked Sason if the individual was present in the Senate session hall.

However, both Paghangaan and Navarette denied being involved in the abduction, saying they were in different places at the time of the incident.

Paghangaan said he was delivering soap in Pila, Laguna. He said he had receipts and text conversations that can prove this.

Navarette said he was not in San Pablo at that time but was manning a checkpoint — and he also had photos to prove it.

But the CIDG director, Brig. Gen. Eliseo Cruz, came to the women’s defense, saying they were consistent in identifying the police officers from a pool of 28 photos presented to them.

“We believe these witnesses are credible. They are victims and they are complainants of these cases,” Cruz said.

“In the case of  Lasco, those who were present where the incident happened are not just simply witnesses. They are victims and complainants. It rarely happens in our investigations that the witness is a victim, and the victim is a complainant,” he added.

“All these witnesses, I personally talked with them in my office to make myself also have first-hand information directly from the witness,” he said.