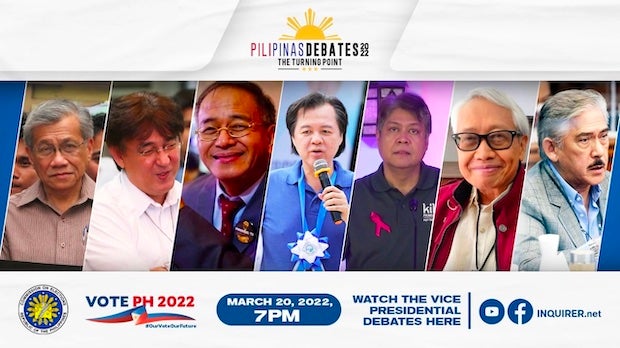 MANILA, Philippines — The P200 month aid that the government will give poor families is not enough to help them through this period of rising fuel prices. The excise tax on fuel products should instead be suspended.

Most vice presidential candidates shared that view on Sunday during the debates organized by the Commission on Elections (Comelec).

“It’s really like President [Rodrigo] Duterte is kidding us with that. That will be all gone in just a day,” Walden Bello said in Filipino.

He said the government should suspend the excise tax and the value-added tax on fuel. He also pushed the increase of minimum wage across the country to P750.

He also proposed that the government should freeze its payments to nonsecuritized foreign debt, saying that 20% of the annual national budget would go to this item.

He also called out the Duterte administration for bringing down the corporate income tax rate from 30% to 20%, saying this was of the wrong priority since this could be a viable source of income for the government.

For his part, Sen. Francis Pangilinan urged the government to immediately release the P500 million subsidy for farmers and fisherfolk and the P2.5 billion aid for the transport sector — and make sure that these would not get lost to corruption.

He also batted for the suspension of the excise tax on fuel, the effects of which Filipino would immediately feel. According to him, it would only need an executive order.

Senate President Vicente Sotto III proposed setting the minimum wage at P1,000 in Metro Manila and P600 to P800 in other places.

He also suggested giving employers a tax break so that they would not bear the brunt of a wage hike.

“It’s better for the government to suffer rather than the people. The government is accustomed to borrowing. But our countrymen, they would go for five-six just so they can eat,” he said in Filipino.

“Five-six” refers to a scheme under which for every P5 of a loan a borrower would have to pay P6  — in other words, pay with a 20% interest.

Sotto also proposed focusing on renewable sources of energy — such as solar energy.

Carlos Serapio proposed that the government should not just focus on energy consumption but also production. He said Filipinos should be given an “energy relief” which could help them save money.

Rizalito David slammed the government’s mentality of approving only the bare minimum.

He proposed that the government should pour its resources into small businesses to spur the economy and alleviate the burden of Filipinos.

“After all, politicians would only steal the money. So let’s just give it directly to small businesses,” David said. “We need to revive the economy, pour resources to small businesses so there would be more sources of livelihood for Filipinos and we would be back to our old way of living.”

Manny Lopez also agreed that the P200 subsidy was not enough, but he said it was “better than nothing.”

He said the spikes in local pump prices were only “speculative” and that the government should use “moral suasion” to convince oil companies not to hike prices.

He reasoned that the Philippines was not dependent on the Russian oil supply, accounting for less than 10% of the global supply of crude oil.

The Russian oil supply can be supplemented by increased production of Saudi Arabia, the United Arab Emirates, and even the United States, he said.

According to Lopez, oil companies have a reserve of fuel that will last for 60 to 90 days. He said they can use the reserve so that prices would not dramatically increase.

Days earlier, Duterte approved the proposal to not suspend the excise tax on fuel products and instead give a P200 monthly subsidy to poor families.