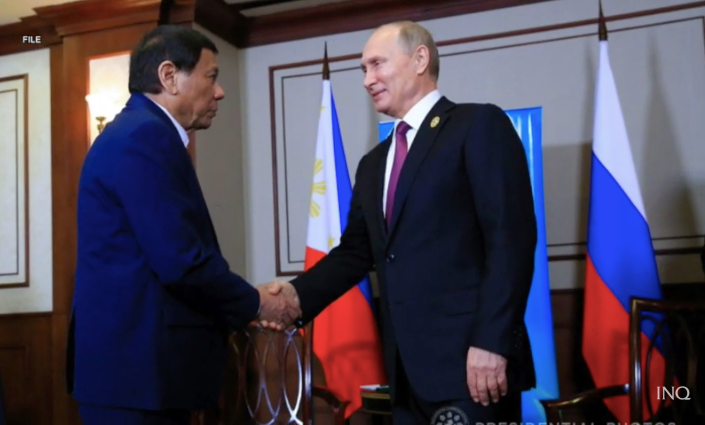 This means the Philippines would not send troops to join the fighting, he said, even if the only commitments made so far by countries against the invasion are weapons and materiel support, particularly on the part of the United States, and economic sanctions and diplomatic pressure against Russia.

“I won’t send a single soldier of mine to go to war,” Duterte said during the inauguration of the Leyte Provincial Government Complex in the municipality of Palo.

He added: “If the Americans engage in a war and they’re here, why will I send my soldiers? It’s not our battle to fight. If the violence spills over and the war somehow gets here, that will be very difficult.”

“We better maintain our neutrality. Let’s avoid meddling in it so that we won’t get involved,” the President said.

The morning after the Department of Foreign Affairs voted yes to a United Nations resolution on Feb. 28 condemning the invasion, Duterte went live on national television as he called for a consensus, or “sensible front,” among leaders in government, business, and other sectors on the conflict in Ukraine.

In its statement to the emergency special session of the UN General Assembly, the Philippines said: “All states enjoy the right to full sovereignty in all their areas of jurisdiction. The charter of the UN requires sovereign states to refrain from the use of force against the political independence and territorial integrity of any state.”

The vote veered from Defense Secretary Delfin Lorenzana’s initial statement on Feb. 25 that the country would be “neutral for now” on the conflict. Later that day, his department issued a statement expressing its “utmost concern” over the situation in Ukraine.

Last week, Ambassador to the United States Jose Manuel Romualdez said the country was ready to open “any [of its] facilities” to US “aircraft” or “the US Navy.”

The diplomat also said Duterte was “very clear that if push comes to shove, the Philippines will be ready to be part of the [international] effort [against the attack on Ukraine], especially if this … crisis spills over to the Asian region.”

But the President, in his own words, warned against any provocation directed at his “idol” and “favorite hero,” as he referred to Putin in 2016.

Speaking in Ilocos Norte two weeks earlier, he said “the Americans will never stomach death and destruction [because] they’re afraid,” whereas Putin is “suicidal.”

“If he loses face here, he will go berserk,” Duterte then said.

On Thursday, he warned that “Europe will die if Russia wreaks havoc,” and that “it would be better to die at the first blast” of a nuclear war.

Despite the international condemnation bearing down on Putin, the President again drew comparisons between himself and the Russian leader, saying that “Putin kills even civilians [while] I killed criminals.”

“Putin is my friend. He is a personal friend,” Duterte said.

Over 3 million have fled fighting in Ukraine