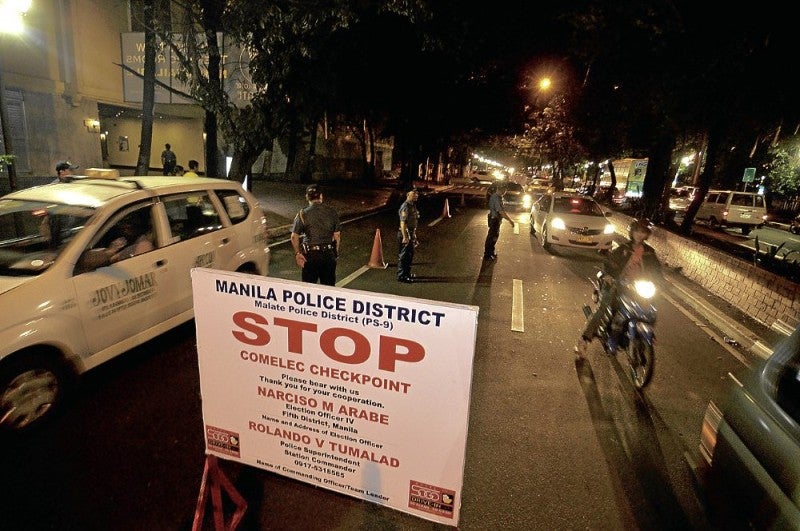 A checkpoint has been put up in this area in Manila to implement the Commission on Elections-imposed gun ban. INQUIRER FILE PHOTO / RICHARD A. REYES

MANILA, Philippines — The Philippine National Police (PNP) on Thursday said the number of individuals arrested for violations of the nationwide gun ban for the 2022 national elections has risen to 1,853.

The PNP released this data after recording 10 new arrested violators on Wednesday, March 16.

According to police, the total number of violators consists of 1,785 civilians, while 15 were police officers, nine military personnel, 27 security officers and 17 remained uncategorized.

A total of 1,428 firearms, meanwhile, were confiscated in the arrests, along with 7,814 ammunition, and 678 deadly weapons.

In terms of the number of incidents, Metro Manila led with the most cases at 626, followed by Central Visayas with 207, Calabarzon with 195, Central Luzon with 124, and Western Visayas with 103 total incidents.

Metro Manila also continues to lead with the most number of arrests at 672, followed by Calabarzon with 206, Central Visayas with 200, Central Luzon with 177, and Western Visayas with 97.

The nationwide gun ban, which began on Jan. 9, will last until June 8, 2022 under the Commission on Elections (Comelec) Resolution 10728.

During the said period, all permits to carry firearms outside of residence have been suspended except for regular members of the PNP, the Armed Forces of the Philippines and other law enforcement agencies — all of whom, however, must be fully uniformed while carrying their weapons.

Violators of the gun ban may face jail time of one year up to six years, disqualification to hold public office, and deprivation of the right to vote.