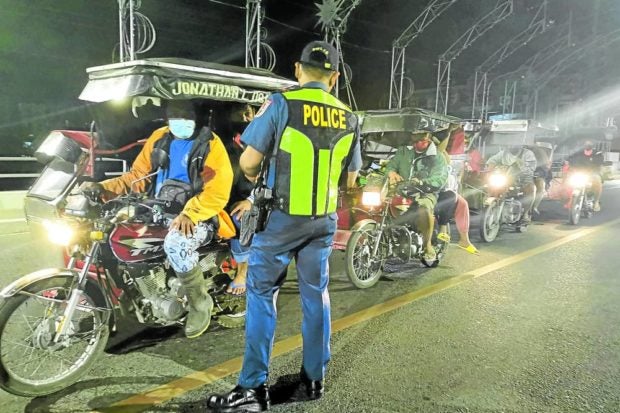 MANILA, Philippines — A nationwide gun ban ordered by the Commission on Elections (Comelec) took effect at midnight of Sunday, which also marked the official start of the 150-day election period.

The ban on carrying or transporting firearms and deadly weapons will last until June 8, a month after the May 9 general elections. (See related story in Regions, Page A4.)

The Comelec suspended all firearms licenses and permits to carry firearms outside of residence during this period. Only law enforcement officers deputized in writing by the poll body are permitted to carry such weapons.

Under Comelec Resolution No. 10741 issued last December, only firearms owners who have secured a certificate of authority from the poll body’s committee on the ban on firearms and security concerns are exempted from the ban.

Violation of the ban is an election offense punishable with one to six years imprisonment, disqualification to hold public office and deprivation of the right to vote.

The Comelec has also prohibited the following during the election period: alteration of territory of a precinct or establishment of a new precinct; transfer or movement of officers and employees in the civil service; use of security personnel or bodyguards by a candidate unless authorized in writing by the commission; organization or maintenance of reaction forces, strike forces or other such forces; and suspension of elective local officials.

The campaign period will officially start on Feb. 8 for national candidates and on March 25 for local candidates.

That period will end for all candidates on May 7. Afterward, a nationwide liquor ban will take effect on May 8 and 9.

The Philippine National Police, meanwhile, reminded cops that exemptions from the gun ban for authorities were not absolute.

PNP chief Gen. Dionardo Carlos said all permits to carry firearms outside of residence are suspended and law enforcers are exempted from the gun ban only if they are on official duty, are in uniform or are in civilian clothes but attending to a police emergency or involved in intelligence gathering activities.

He emphasized, “It should be understood that only on-duty police personnel, clearly identified as members of the PNP, are allowed to carry their firearms.”

“Any citizen may report to the PNP any police personnel abusing or violating this rule,” Carlos also said.

He further reminded PNP personnel in checkpoints that they are limited to visual searches except when they are authorized by law to conduct further inspection under certain conditions.

One such condition is defiance by a motorist of a security checkpoint which, he explained, may give reasonable ground that the person has committed or is about to commit a crime.

Carlos advised the public that they are not compelled to alight from their vehicles at a checkpoint for physical checks.

He added, “They will not be required to open their glove compartment, trunk and bags.”

The Comelec requires checkpoints to have the proper signage bearing the name of the local police chief, and for these posts to be set up in a well-lit location.

These checkpoints should also not hamper the smooth flow of traffic.

Furthermore, police and military personnel manning the checkpoints should be in proper uniform.

Carlos affirmed that persons found carrying firearms would be asked to show their Comelec-issued certificate of authority exempting them from the gun ban.

Those who fail to present valid exemption face arrest and a charge of violating the ban.

Arrested at joint police and military checkpoints, just hours after they were set up, were five persons: Wendell Datoy for possession of a .45 pistol, 18-year-old Earon Jay Mascara and a 17-year-old companion for possession of a replica model 1911 pistol, in Zamboanga Sibugay; Jerwin Gubaton for a .38 revolver in Navotas City; and John Paul Dunlao for a .38 revolver in Caloocan City.