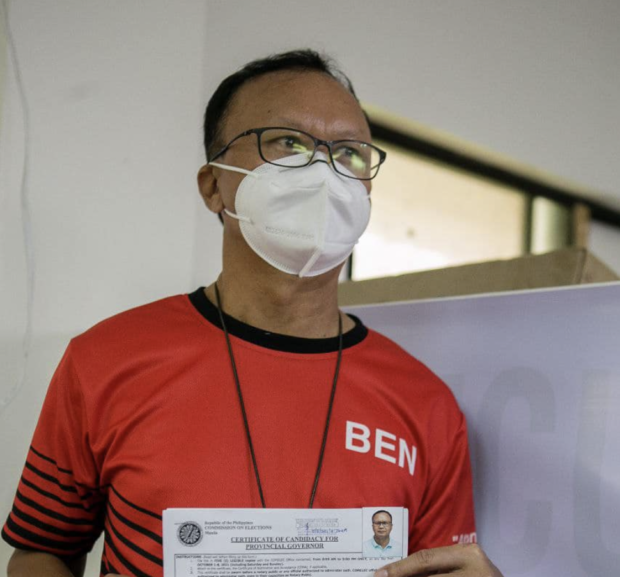 MANILA, Philippines — President Rodrigo Duterte has given his blessing to PDP-Laban vice president for Visayas and Eastern Samar Gov. Ben Evardone to endorse the candidacy for president of Vice President Leni Robredo.

Evardone in a statement on Wednesday said he cleared first with the President his intention to support Robredo. “My decision to endorse VP Leni carries the blessing of the President.”

The PDP-Laban stalwart said he went to Malacañang last February 14 to inform Duterte of his inclination to support Robredo “out of respect,” saying the President is a father figure to him.

“I told him that I am about to endorse VP Leni because I see in her the sincerity of a leader to help the poor,” he said.

In response, Evardone said the President told him, “I understand, I respect and support your decision.”

Evardone said he is hoping that Duterte would eventually endorse Robredo.

“Based on PRRD’s television interview last Saturday, I get the sense that his heart is for VP Leni,” he said.

Evardone on Monday announced his endorsement for Robredo, citing the qualifications set by Duterte for his successor.

Duterte earlier said the ideal president should be a decisive, compassionate lawyer.

Evardone said Robredo is the “only one decisive and compassionate lawyer among those aspiring to be President.”

“If the President decides to endorse her, that would greatly help propel her to victory and there would be a continuity of PRRD’s pro-people reform programs,” he said.

He pointed out that if there is a presidential aspirant who could continue the reforms and pro-poor programs of the Duterte administration like the Malasakit and build build build, that candidate is Robredo.

“VP Leni has consistently advocated and helped the poor communities even when she was still a volunteer lawyer for the oppressed,” Evardone said.