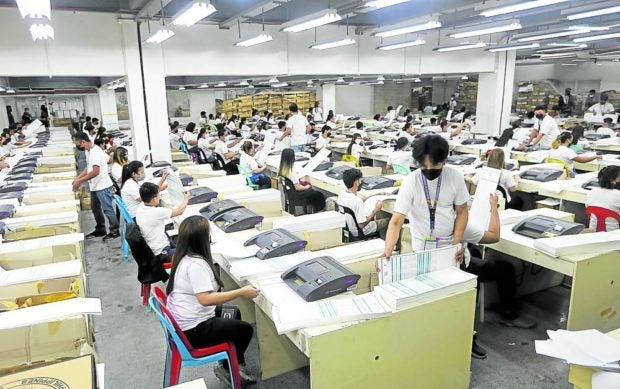 GOOD BALLOTS Workers at the National Printing Office in Quezon City check ballots for the May 9 polls to separate the “good ballots” from those that are defective. The Commission on Elections says 31,996,605, or 47.4 percent of 67,442,616 ballots needed, were approved for use in the national elections. —NIÑO JESUS ORBETA

MANILA, Philippines — Representatives of presidential candidate Leni Robredo, her chief rival Ferdinand Marcos Jr., and other aspirants and their parties were prohibited from observing the printing of official ballots in disregard of election law, the Vice President’s lawyer said on Tuesday.

Veteran election lawyer Romulo Macalintal said the Commission on Elections (Comelec), specifically Commissioner Marlon Casquejo, “disallowed in the meantime” the presence of representatives of Robredo at the National Printing Office (NPO) when printing started on Jan. 23.Victor Rodriguez, spokesperson for Marcos, said they, too, were “essentially disallowed” from observing the ballot printing as they received no reply to a request to witness it.

“For as early as January, long before the printing of official ballots began, we have written the Honorable Commission on Elections requesting that official representatives of presidential front-runner Bongbong Marcos be allowed access to witness the printing of ballots, but to date we have yet to receive any reply from them,” Rodriguez said.

Macalintal said they wrote the Comelec on Feb. 16 requesting that their representative witness the ballot printing, which is mandated by the Omnibus Election Code.

On March 8, they received the “sad news” that the Comelec denied their request, saying that “critical areas” within the premises of the NPO were off-limits even to some personnel of the printing office itself and the Automated Election System provider were also disallowed for “security reasons.”

“Any additional activity other than the above mentioned may cause delay in the preparations and timeline,” Macalintal said, quoting from the letter sent by Comelec Executive Director Bartolome Sinocruz.

He criticized the Comelec for doing an “unforgivable disservice to the entire Filipino electorate for ignoring and disregarding” the law. The decision was “clearly arbitrary” since it was made only by Casquejo, Macalintal said.

“Since Commissioner Casquejo’s act is a complete deviation from what the law mandates, the decision should have the concurrence of the majority of the members of the Comelec,” Macalintal said.

Asked whether the poll body’s action was a “deliberate attempt” to commit election fraud, Macalintal said he did not think it was. “But what was deliberate is the printing of the ballots without the presence of watchers, which is required by law,” he said.

“The law is very clear and it mandates the Comelec to allow all parties to be present during the printing of the ballots. The law is there to make sure that there is transparency and dispel doubts for the elections,” Macalintal said. “Now, how can we make sure that what they printed were indeed official ballots?”

Casquejo cited health concerns to explain why they did not invite observers to the start of the printing in January.

Metro Manila was then under alert level 3.

“We apologize that we did not immediately open the NPO for observation. It’s because of the pandemic surge and we need to catch up with the printing,” Casquejo told reporters and representatives of poll watchdogs and political parties during a “walkthrough” of the printing process at the NPO along with newly appointed Comelec Chair Saidamen Pangarungan and Commissioner George Garcia.

Anticipating that reasoning, Macalintal told reporters at a press conference that the pandemic should not be used as an excuse for disallowing their watchers or representatives from observing the printing of election documents.

The Comelec on Tuesday reported that 49,737,783 ballots had been printed so far, but a “verification” process showed that only 31,996,605 were considered “good ballots.” This represented 47.4 percent of the 67,442,616 total ballots needed for the May 9 elections, less than two months away.

Casquejo said 5,228,260 printed ballots were defective because they had “smudges” or were “miscut,” which he explained were “part of the printing process.”

The good ballots had been transported to a warehouse in Pasig City, from where they will be deployed nationwide.

“We will allow access to all activities of the commission,” Pangarungan promised on Tuesday.

Comelec said it would allow accredited observers into a viewing room at the NPO as well as provide live streaming of the ballot printing.

On Monday, poll officials led by Pangarungan led a walkthrough at the Comelec warehouse in Sta. Rosa, Laguna, where some 100,000 vote-counting machines and other equipment to be used in polling precincts on May 9 are being assembled.

Aside from the official ballots, the NPO also has to print 1,401,205 ballots for the final testing and sealing of the vote-counting machines.

Comelec is aiming at deploying the vote-counting machines beginning April 2 and the ballots on April 20.