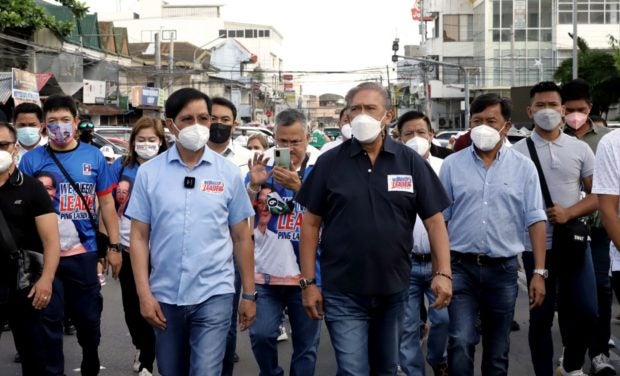 CAUAYAN, Isabela — Banking on their “history” with Isabela, presidential candidate Senator Panfilo Lacson and runningmate Senate President Vicente Sotto III “feel” the support of their “friends” in the province, considered among the “Solid North” areas.

“May history kami pareho ni Tito Sen dito sa Isabela [We have a history here in Isabela],” Lacson told reporters in a press conference here when asked how they plan to get a major number of votes in a “Solid North” province.

Lacson served as the provincial commander in Isabela from 1988 to 1989. During his stint in the province, the senator encountered a near death experience.

In a flag ceremony at the Cauayan City Hall, Lacson recalled how a failed ambush hit of the New People’s Army (NPA) against him led to the killing of one of his lieutenants, Rosauro Toda Jr.

Lacson paid tribute to Toda, who died in his arms following the NPA attack. His four other soldiers survived but suffered serious injuries, according to him, he added.

“The ambush was meant for me. It just so happened that we got there a minute late and unfortunately Lt. Toda was the one who died,” Lacson said in Filipino.

Lacson said the encounter happened when he and his men tried to respond to an NPA raid at Sitio Dicamay in Jones, Isabela.

Toda was supposed to lead a reinforcement team for him during that mission, not the other way around, but Lacson said he was not able to contact him on radio to advise him to go back.

Meanwhile, Lacson said the province of Isabela was able to deliver high votes for him when he ran for senator in 2001.

For his part, Sotto said he and Lacson will bank on what they have done for the province of Isabela.

“Malalim ang mga pinagsamahan namin kasi dito. That is why we not only expect but we also feel the support of our friends, mostly from the local government officials. Marami pa ritong NPC (Nationalist People’s Coalition). Marami rin kaming fraternal brothers dito. Meron ding Partido Reporma rito. So, we will bank on that,” Sotto said.

“We can also bank on what we have done. Why don’t you ask the other candidates what they have done for Isabela. Siguro alam ng mga taga-Isabela kung may nagawa sila para dito o wala. Kami meron. Si Senator Lacson nagsilbi rito ng matagal sa peace and order,” he added.

Further, Sotto stressed that the May 9 polls will determine if the “Solid North” vote still exists.

Ilocos Region and other Ilocano-speaking provinces and neighboring Cagayan Valley were long thought to be the turf of the Marcos family, who hails from Batac in Ilocos Norte.

The term “Solid North” refers to the supposedly strong or compact support of North Luzon voters to the presidential bid of the Marcos scion.