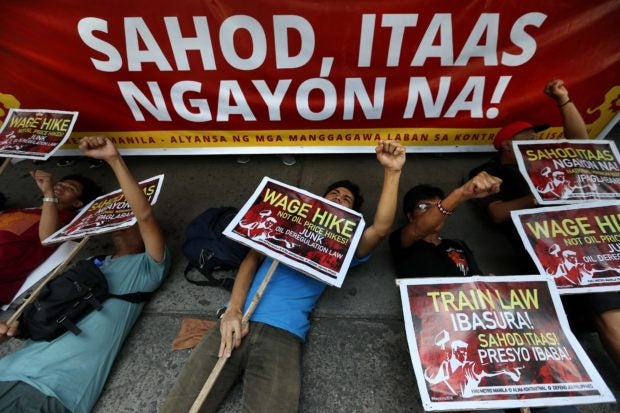 NO RELIEF YET The Trade Union Congress of the Philippines (TUCP) is proposing to increase the minimum wage of workers in Metro Manila. FILE PHOTO

In a petition filed before the Department of Labor and Employment’s Regional Tripartite Wages and Productivity Board, TUCP sought a P470 wage hike from the current P500 to P537 per day in the National Capital Region (NCR).

“Trade Union Congress of the Philippines most respectfully prays for the granting of four hundred seventy pesos (Php470.00) daily wage increase for all private sector workers in the NCR to be given across-the-board since all need healthy food and are subject to the same changes in the prices of goods and services,” their petition stated.

In asking for a wage hike, TUCP noted the price adjustments of commodities and the increasing oil costs in their call.

“That there is a compelling need to bridge the huge gap. The current minimum daily wage of P537.00 can only accord workers and their families ‘nutritionally deficient survival meals,’ which if continuously unaddressed an army of undernourished Filipino workers will have greater repercussions in the future of the country and of the economy,” the petition reads.

The group also said that the P3,874 from the P12,843.48 monthly income is “sorely inadequate” to cover for health, transportation and communication, and education, among others.

The Bukluran ng Manggagawang Pilipino, another labor group, is pressing for a P750 minimum wage across the country as they called the current wage as “starvation wages.”