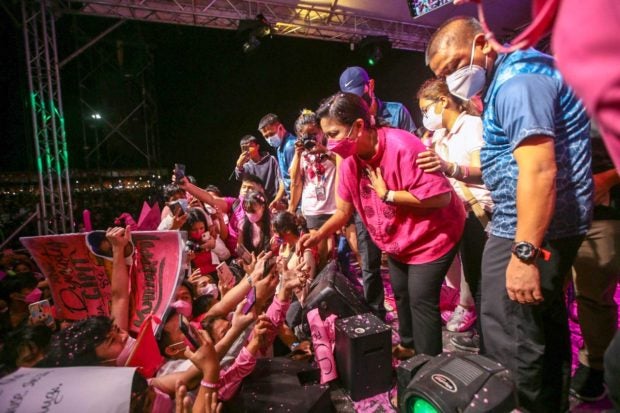 MANILA, Philippines — The administrators of a public school in Alcala, Cagayan where the People’s Party of Vice President Leni Robredo was supposed to be held are in hot water for alleged violation of a government policy against using public schools for political activities.

The use of the Baybayog National High School did not push through after a parental consent form that the school asked its high school students to get signed by their parents became viral.

But the camp of Aksyon Demokratiko standard-bearer and Manila Mayor Isko Moreno appeared not likely to let the issue die a natural death.

On Monday, Aksyon Demokratiko Chairman Ernesto Ramel Jr. called the attention of Department of Education (DepEd) Secretary Leonor Briones on the alleged violation of government policy against the use of public schools for political activities.

“I am writing to your good office to report a possible violation of government policy against using public schools, specifically elementary and high school students, for political activities of presidential candidates,” Ramel said in a March 11 letter to Briones.

He also flagged the parental consent form, which stated: “I/We have considered the benefits that my son/daughter will derive from his/her participation in this activity provided that due care and precaution will be observed to ensure the comfort of my son/daughter and that the Department of Education employees and personnel may not be held responsible for any untoward incident that may happen beyond their control.”

The event was cancelled on March 12 after the consent form received flak from social media users, while DepEd has already acted following the incident, according to Ramel.

“We have demanded an apology from the principal. The letters of parental consent have already been withdrawn. The policy is to treat all candidates equally. We are circulating again all our issuances on partisan politics,” the office of DepEd secretary was quoted as saying in Aksyon Demokratiko’s press release.

DepEd has reminded the teachers to avoid electioneering and participating in electoral politics.

The Omnibus Election Code, as amended, prohibits government officials and employees from engaging in any electioneering and partisan political activity and cosiders the commsion thereof as an election offense punishable by law.

Alcala Mayor Tin Antonio said that they were not aware that the school had issued a “consent form” for Robredo’s rally.

“But it is laudable that our dear Alcala teachers would like to engage their students and their parents in this way,” Antonio said in a statement on March 10.

Antonio said they also treated Robredo’s visit as official: “This is the first time that the incumbent Vice-President and second-highest official of the land will come to our humble town.”

Robredo’s spokesperson Barry Gutierrez told INQUIRER.net that the event was an initiative “undertaken independently” by the school.

“If Mr Ramel really wants to go after the teachers of a public high school over this, then that is his option. It certainly reveals a lot about the campaign he is representing,” Gutierrez said in a text message.