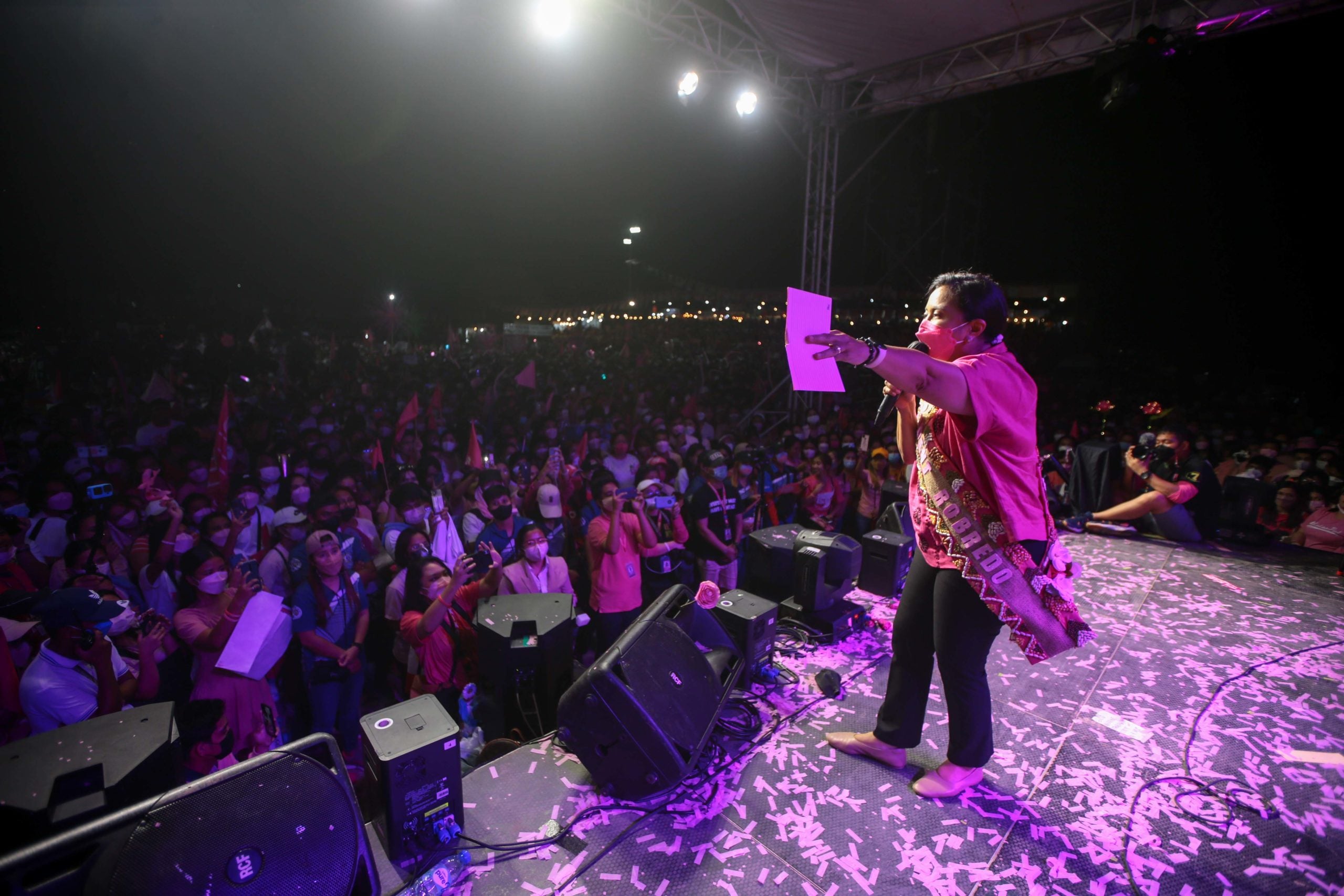 ECHAGUE, Isabela —On Saturday, the North delivered for a Bicolana.

Local police pegged the crowd gathered at the Echague Municipal Hall at around 10,000—smaller than the TRoPang Angat ticket’s typical crowd size, but could still signal cracks in the Solid North vote.

“Grabe kayo,” a stunned Robredo said during the rally. “You really surprised us. Thank you so much.”

Preempting allegations that they brought people in, Robredo said: “You know that whenever we have a good crowd, we get immediately accused of paying people to go here,” she added, as the crowd chanted “Hindi kami bayad!”

“But we should just shrug those off because we know why we’re here. You are not just fighting for us but for the future of our country.”

This was Robredo’s first barnstorming across the northern provinces, which historically has delivered votes for the Marcoses thanks largely to their mythmaking there.

Robredo shared how nervous she was going from her bailiwick in Bacolod, which saw her largest rally yet, to Cagayan and Isabela, where she was trounced in the 2016 vice presidential race.

But save for a handful of residents trolling at the rallies screaming “Marcos pa din!” Robredo’s sorties inside the Marcos country have been relatively peaceful.

Her supporters here have been moving silently along the fissure lines. In fact, it was her Isabela Kakampinks who first opposed the Comelec’s arbitrary removal of Leni-Kiko posters on private property.

On Saturday, Robredo and Pangilinan themselves painted a rose for a mural the Comelec had painted over during their “Oplan Baklas” operations now ordered stopped by the Supreme Court.

“Because you have gone through so much hardship and sacrifice, you have shown and given us so much inspiration,” she said. “You remind us that because you are decisive and you understand how important these elections are, we will fight no matter how hard it is.”

At every stop, their Kakampinks kept encouraging them: “Awan ti Solid North! Babawi kami! (There is no Solid North! We will make amends!)”

The opposition ticket is also not without allies here: Alcala Mayor Tin Antonio and her father, former Gov. Bong Antonio, have endorsed her for the presidency.

Speaking to reporters, Antonio said Alcala “remembers” how Robredo was the first to send help when the province was submerged during the height of Typhoon Ulysses.

While converting Marcos loyalists is no easy task, Antonio promised to “comb through each house and talk about all the good that Robredo has done not just for Alcala but for Cagayan and the whole Philippines.”

For now, the youth are mostly the ones daring to wade against the north’s political current. Volunteers like Khalil Hamdain and Henrick Dulin, for example, expressed hope that the north is starting to awaken from the Marcoses’ mythmaking.

Robredo knows “how difficult it is for you to show up here and support another presidential candidate, so thank you so much for your courage,” she said, to which Cagayanons replied: “Hindi mahirap! Walang Solid North!”

Pangilinan, at least, had won both provinces when he ran for senator. Still, he reminded Cagayanons not to vote for someone who “never shows up”—a clear swipe at Marcos Jr., who has dodged all public avenues for scrutiny.

“When you are being courted, shouldn’t that courter face you? When they don’t, it only makes you think they are hiding something, or that they are scared.”