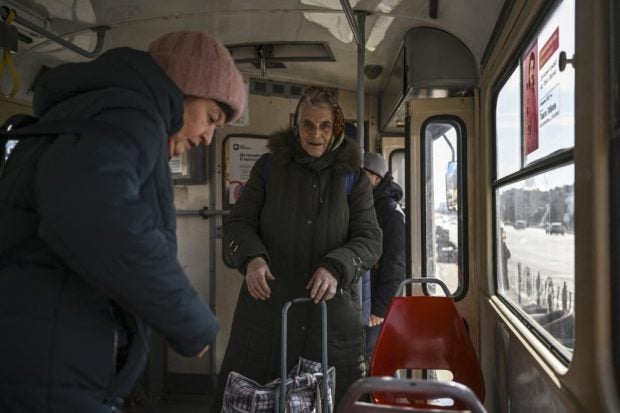 KYIV — The world-weary conductor nudged her rusty red tram past the barricade and shook her head at the tragedy she has seen befall Kyiv since Russian forces invaded Ukraine.

A group of soldiers to her right were suspiciously peering into passing cars for signs of explosives and guns.

A highrise to her left had destroyed balconies and windows shattered by a missile a few nights after Russia attacked on February 24.

The packed passengers behind her stood sullenly and watched an uncomfortably deserted Kyiv roll by.

Yelena Sabirova’s 19-year career as a tram conductor was never supposed to see her end up on the frontlines of a war.

“It’s frightening,” the 45-year-old sighed in her rattling conductor’s cabin.

“At least I am helping people get to where they need to go — to bomb shelters, to the train station,” she said. “But otherwise, of course it is frightening.”

‘The city has changed’

Kyiv’s remaining residents — estimated to be only half of the original three million — appear not only frightened but also profoundly sad to see their city threatened with destruction.

“I’m worried, I worry for the city. It’s been developing for so many years,” said 69-year-old Mykola Konoplytskiy.

“And then they come and destroy it. How are we going to rebuild it? With what funds?” he asked.

The 34-year-old takes Sabirova’s 8K line to work daily and knows some of its regular passengers by name.

But her familiar day-dreaming voyages along the east bank of the Dnipro River are now interrupted by booms echoing along Kyiv’s northern front.

“I can hear them riding the tram. And I hear them at home,” the bartender said. “The city has changed.”

Sabirova’s tram line is one of the few still trundling through the maze of Kyiv’s barricades and checkpoints.

Kyiv’s working-class east bank is home to the city’s more sleepy residential neighborhoods and some of its biggest factories.

The west side has a richer history — and a much closer frontline.

Its trams stopped running almost immediately because they offered a direct route from the front to the cluster of government buildings Ukraine’s forces need to protect against the Russian advance.

East siders such as Tanya Pogorila can cling on to more remnants of their past lives.

The 45-year-old’s eyes wandered across the shuttered shops and piles of rubble lining her regular route.

“This is the first time I’ve come out since the start of the war,” she said.

“Some of my worst fears are now fading. I’m just mostly afraid for my kid,” she said of the little boy standing between her knees.

“I feel sorry not only for Kyiv, but also for the whole country.”

The tram conductor pulled closer to a beefed-up checkpoint marking the abridged end to her line and wondered how much longer her tram will continue to run.

“I haven’t seen anything too terrible, but I hear things — the explosions, the booms,” Sabirova said.

“I hope the guy up in the heavens notices that I still keep doing this and takes it into account at the end,” she added on a more sardonic note.

“And the people seem grateful that I am still working.”

Pensioner Konoplytskiy was himself a lifelong trainline worker and felt especially appreciative of Sabirova’s resolve.

But he gloomily predicted that Russian President Vladimir Putin would soon order a punishing assault on Kyiv as he has already done on devastated cities such as Mariupol and Kharkiv.

“I think Putin is saving Kyiv for dessert,” Konoplytskiy said.

US authorizes $200 million in additional military aid to Ukraine