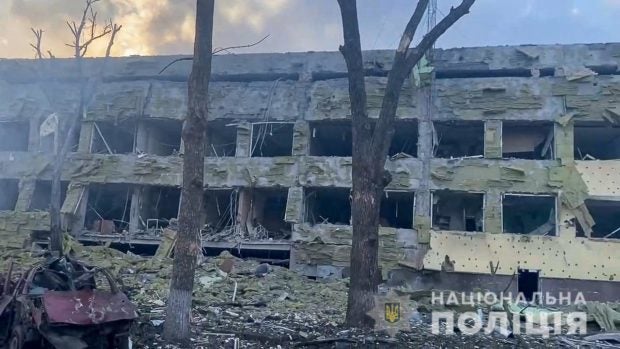 This handout picture taken and released by the National Police of Ukraine on March 9, 2022, shows damaged buildings of a children’s hospital, destroyed cars, and debris on the ground following a Russian airstrike in the southeastern city of Mariupol. – International leaders and Ukraine accused Russia of a “barbaric” attack on the hospital, as civilians continued to bear the brunt of the conflict two weeks into Moscow’s invasion. (Photo by Handout / National Police of Ukraine / AFP)

MADRID — Spain on Friday took in 25 Ukrainian children with cancer who will be able to continue their treatment after it was halted by Russia’s invasion of Ukraine, the government said.

“A defense ministry flight has just landed carrying 25 Ukrainian children with cancer and their families, so they will be able to continue their treatment in Spain,” the government wrote on Twitter.

The military plane, which landed at an airfield in Madrid, was also carrying “another 22 displaced” Ukrainians who will be taken in by Spain, the defence ministry said, also on Twitter.

The children “will be treated in public hospitals specialising in treating child cancers,” said the Spanish Federation of Parents of Children with Cancer, which sponsored the children’s arrival in Spain alongside the Spanish Society for Paediatric Haematology and Oncology.

The federation said it was hoping to be able to bring more child cancer patients from Ukraine “in the coming days” along with their families who would be treated at hospitals in Barcelona, Valencia and Andalusia.

“These children need urgent medical care but also long-term treatment… we will offer all of our resources to these youngsters,” said its spokeswoman Carmen Menendez.

More than 2.5 million people have fled Ukraine since Russia began its military offensive against the country on February 24, the United Nations said on Friday.