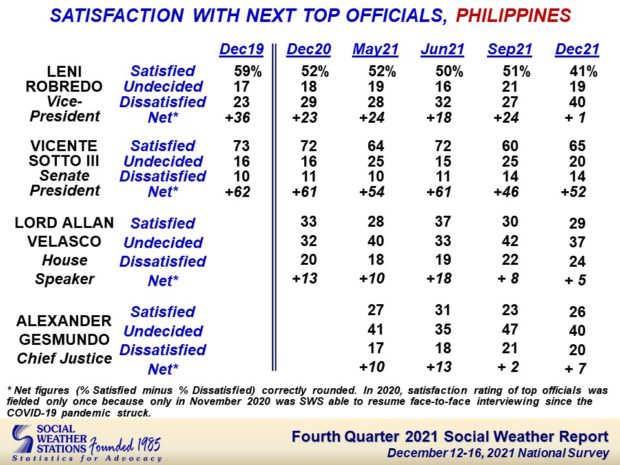 Satisfaction with next top officials, Philippines

The fourth quarter 2021 SWS survey released to the public on Friday showed that 65 percent of the respondents were satisfied with Sotto’s performance as top leader of the Senate while 14 percent were dissatisfied, for a net score of +52.

The survey, which was conducted through face-to-face interviews of 1,440 adults from December 12-16, 2021, also showed that Robredo had the biggest loss in terms of net satisfaction rating.  The Vice President had a +24 score in September 2021, which meant that she suffered a 23 point-decrease in the latest survey.

Sotto recorded the biggest jump in satisfaction ratings among the said officials, from a +46 score in September 2021 to +52 in December.

Still, it is lower than President Rodrigo Duterte’s +8 increase in net satisfaction ratings based on the SWS survey released last February, jumping from +52 in September 2021 to +60 in December.

SWS explained that Robredo had the biggest decrease in satisfaction ratings because her score fell down in all locales — Metro Manila, Balance Luzon, Visayas, and especially in Mindanao.

Mindanao is considered the bailiwick of Duterte, who hails from Davao, and whose policies have been criticized heavily by the Vice President.

Sotto’s numbers, on the other hand, were up due to increases in all areas except in Mindanao, where his opponent in the vice presidential race, Duterte’s daughter and Davao City Mayor Sara Duterte-Carpio, comes from.

INQUIRER.net has sought the comments of Sotto, Robredo, and Velasco regarding this latest SWS poll but none of them has issued a statement about the survey yet.  Sotto said the has not yet seen the latest SWS survey.

SWS said the fourth quarter survey involved 360 respondents per locale.  The polling firm said they are maintaining sampling error margins of ±2.6% for the national percentages, and ±5.2% for Balance Luzon, Metro Manila, Visayas, and Mindanao.