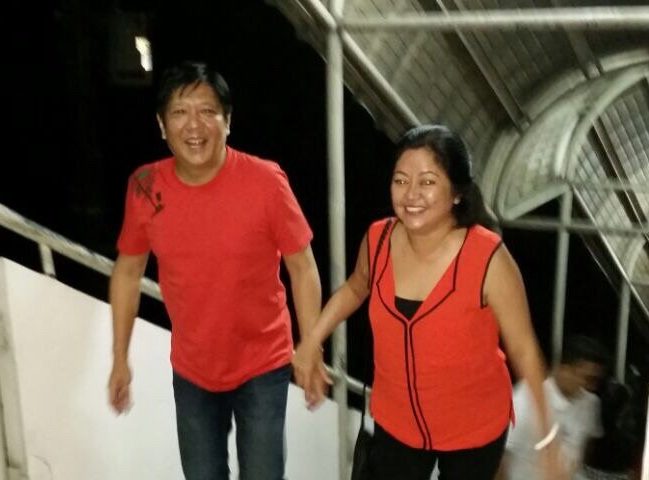 MANILA, Philippines — The wife and son of presidential candidate Ferdinand “Bongbong” Marcos Jr. are wary about claiming early victory in the polls, saying his 2016 defeat in the vice presidential race was very painful for them.

In an interview with TV host Boy Abunda, Louise “Liza” Araneta-Marcos said she was not yet thinking of what her role would be as first lady.

“No, you know, I don’t want to jinx it, because in 2016 we really thought we would win. And it was really painful,” said the 62-year-old lawyer, a founding partner of Marcos, Ochoa, Serapio & Tan Law.

She also revealed how her husband decided to run for president.

“Six months ago, he wasn’t yet sure what to do, he had no party. And then one day, we were watching ‘Ant-Man’ in the room, because we love Marvel movies, and then he looked at me and he goes, ‘Okay, we’re gonna do this,’ he told me,” Liza said.

“Also, I didn’t want him to get hurt because you know in 2016, when he lost [in the vice presidential elections], it was really a painful experience for him and he was like, ‘wow, what happened?’” Liza said.

“You see this groundswell and poof, you lost, and that’s everyday campaigning. So it’s really painful. It was a painful experience,” she added.

Asked if she discouraged her husband from seeking the presidency, Liza said: “It’s his decision. I didn’t encourage, but I didn’t discourage.”

“Now people are saying ‘you’re so strong, that’s a sure thing.’ In my mind, try losing and living with it for six years. That’s difficult,” she added.

In the same interview, their son Vincent said that since 2016, the family has been “so superstitious.”

“No amount of lead can make me comfortable with speculating what I’m going to do after the election,” he said.

Vincent, or Vinny, is the youngest of three sons at age 24. The eldest is 28-year-old Ferdinand Alexander “Sandro” Marcos and the second son is Joseph Simon Marcos, 26.

Liza, daughter of Manuel L. Araneta and Milagros Cacho, also said she has no plan to enter government or join politics.

“If ever, teaching will be good. I’m a lawyer. But to enter government? No way. They can’t afford me. And I’ll fire all of them,” said the New York University-educated Liza, a cousin of former Sen. Mar Roxas.

Government is “not my thing,” she said.

Bongbong Marcos was watching ‘Ant Man’ when he decided to run for president, says wife