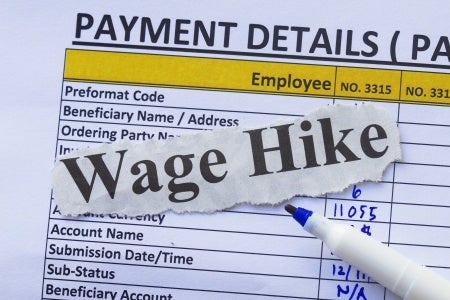 MANILA, Philippines — With surging costs of fuel and basic goods resulting from Russia’s invasion of and continuing aggression against Ukraine, the labor group Partido Manggagawa (PM) on Thursday called on Congress to legislate a P100 increase in the daily minimum wage nationwide.

The group added demands for “cash aid, price discounts, and an emergency jobs creation program” on top of a wage increase. Its national chair, Rene Magtubo, pointed out that an increase was long overdue because the minimum wage was last adjusted more than three years ago.

“The regional wage boards are useless. They have been sleeping on the job for the past three years. Instead, workers want Congress to pass a law mandating a P100- across-the-board wage increase,” Magtubo said.

He said data from the National Wages and Productivity Commission showed that the P537 minimum wage in Metro Manila was worth only P494 as of February 2022, based on inflation since 2018.

In a radio interview, Sen. Panfilo Lacson said the government must now review the minimum wage in regions nationwide.

The Partido Reporma standard-bearer said the rising cost of living was the constant complaint heard from ordinary citizens during campaign stops and consultations as he and his running mate, Senate President Vicente Sotto III, went around the country.

“We really have to start discussions now [to see] if there is a need to adjust the minimum wage, and by how much,” Lacson said.

The most recent wage increase was granted daily minimum wage earners in Cagayan Valley on Feb. 4, 2020.

“The P100 is not enough to raise minimum wages to the level of the cost of living,” the PM’s Magtubo said. “Thus, a holistic approach necessitates cash aid, price discounts, and an emergency jobs creation program in response to the spike in food prices.”

On Wednesday, Labor Secretary Silvestre Bello III announced that he had ordered all regional wage boards to study the possibility of an increase in the daily minimum wage because, he said, “the buying capacity of our workers has been affected” by “skyrocketing prices.”

Bello instructed the regional tripartite wages and productivity boards to submit their recommendation by the end of April or before May.

Lacson agreed with Bello’s call for the regional wage boards to discuss possible wage adjustments, saying it was “very timely.”

He said many workers that he and Sotto had met with were lamenting the increasing costs of goods and services caused by steep fuel prices and compounded by inflation.

The senator said that while the wealthy could absorb the higher costs of living, ordinary families might not.

In a subsequent press conference in Parañaque City, Lacson reiterated his call for the government to include tricycle drivers among the recipients of the intended subsidy for public transport drivers.

But he disagreed with the recommendation that any subsidy for tricycle drivers be borne by local government units (LGUs) that have jurisdiction over their regulation.

According to Lacson, tricycle drivers are often excluded from any subsidy program of the national government because of the assumption that LGUs can provide the funding for it.

“But this is not always true because what about fifth-class municipalities? The tricycle drivers there will end up woeful,” he said.

He admitted that Congress had failed to explicitly include tricycle drivers in subsidy programs under Republic Act No. 11534 or the Corporate Recovery and Tax Incentives for Enterprises (Create) Act, otherwise known as the TRAIN 2 law.

“Whenever we ask [tricycle drivers] if they ever received the government subsidy, they would say they have not received anything. We realized that the law we passed excluded them. So I hope this will be corrected,” he said.

Here are the daily minimum wage rates per region and their dates of effectivity: