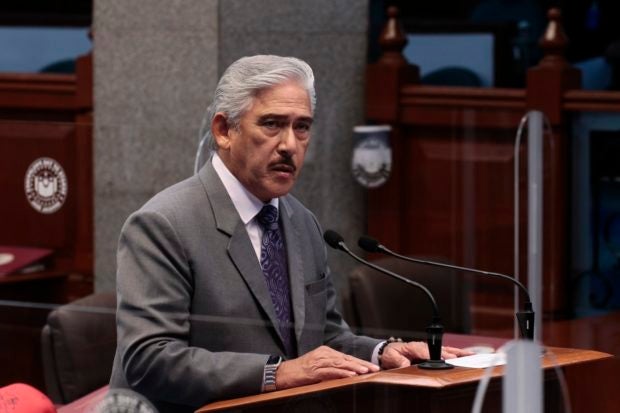 MANILA, Philippines — Senate President Vicente Sotto III on Wednesday said the Philippine Amusement and Gaming Corporation (Pagcor) has the authority under its charter to act on its own on the recommendation of the Senate committee on public order and dangerous drugs to suspend the operations of e-sabong or online cockfighting.

“At least suspend the operation of e-sabong since the recent hearings have already exposed its vulnerability to addiction and criminality. Our government should protect our values and people rather than just the profit it might generate,” Sotto told Pagcor officials.

The Senate President said the charter creating Pagcor allows it to initiate actions against gaming industry players which are under investigation by the agency or other investigative bodies for suspected violation of government regulations, or those which have been found to be violating existing laws.

With this authority, Sotto said the Pagcor could temporarily discontinue e-sabong games while the Senate panel is still investigating the case of the 34 missing sabungeros or cockfighters, and while lawmakers and the executive come up with legislative corrections to plug the loopholes in the management of online cockfighting.

The Senate committee on public order and dangerous drugs has already held two hearings on the issue, and it was during the first hearing that the Senate issued a resolution urging Pagcor to suspend e-sabong operations and licenses, which a representative from the agency initially supported.

However, Pagcor representatives told senators during the second day of the committee hearing into the issue that it could not just yet suspend the licenses of e-sabong operators because President Rodrigo Duterte has not given the go-signal for the suspension.

Sotto said the Senate was merely asking for a suspension of e-sabong licenses, not their revocation.

“Ako ay nalulungkot na ang Pagcor ay dinala pa sa Presidente ang usapin. So, ano ang rekomendasyon nila? Sabi ni Executive Secretary Salvador Medialdea inaantay pa nila ang recommendation ng Pagcor at ang Senate resolution. Pero base sa batas, puwedeng manggaling lang sa Pagcor ang desisyon kasi suspension lang naman. The mere fact na pinarating pa sa Presidente ang usapin, that means ayaw nila (I am disappointed because Pagcor even raised the issue to the President. So, what was their recommendation? Executive Secretary Salvador Medialdea said they are waiting for Pagcor’s recommendation and the Senate resolution. But based on its charter, Pagcor can suspend the licenses or operations of e-sabong operators on its own. The mere fact that it brought up the matter to the President indicates that Pagcor does not want to suspend e-sabong),” Sotto said.

Sotto said the indecision of the Pagcor could be due to the fact that it earns P640 million a month from e-sabong operations. “That’s why it is useless to appeal for the reconsideration of Malacañang’s decision,” Sotto said.

Presidential candidate Sen. Panfilo Lacson agreed with Sotto that Pagcor does not need to wait for Malacañang’s approval before it suspends the licenses of e-sabong operators.

Sotto and Lacson made their remarks after Malacañang turned down the Senate panel’s recommendation to suspend the licenses of e-sabong operators until the issue on the 34 missing sabungeros or cockfighters have been resolved.