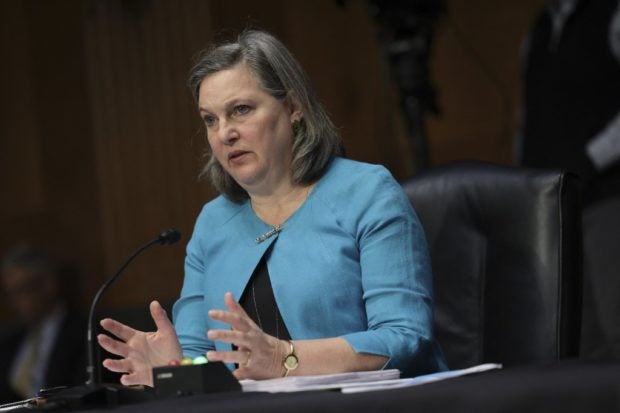 WASHINGTON — The United States said Tuesday it was working with Ukraine to prevent invading Russian forces from seizing biological research material amid concern governments or unscrupulous actors might try to use such items to create bioweapons.

“Ukraine has biological research facilities, which in fact we are now quite concerned Russian troops, Russian forces, may be seeking to gain control of,” senior State Department official Victoria Nuland told US lawmakers at a hearing when asked directly whether Ukraine has bioweapons.

“So we are working with the Ukrainians on how they can prevent any of those research materials from falling into the hands of Russian forces should they approach.”

US Senator Marco Rubio noted there were “Russian propaganda” reports claiming the discovery of a plot by Ukrainians to release biological weapons, with coordination from NATO.

Asked by Rubio if a biological or chemical weapon attack were to occur inside Ukraine, whether Russians would be behind it, Nuland asserted: “There is no doubt in my mind, senator.”

“And it is a classic Russian technique to blame on the other guy what they’re planning to do themselves.”

On March 6, Moscow’s foreign ministry tweeted that Russian forces found evidence that Kyiv was “eradicating traces of the military-biological program in Ukraine,” financed by the Pentagon.

The Atlantic Council, a think tank headquartered in Washington, says the Kremlin was seeking to justify its invasion by pushing a false narrative that Ukraine was developing dirty bombs and biological weapons.

The council said there was no evidence Ukraine was creating such weapons.

US hits Russia with sanctions over nerve agent attack in Britain