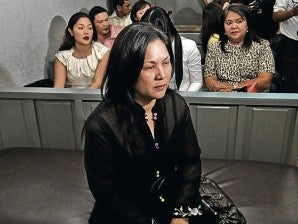 MANILA, Philippines – Both Aleli Arroyo and Grace Ibuna were present at the House of Representatives on Monday when lawmakers paid their last respects to late Negros Occidental Representative Ignacio “Iggy” Arroyo Jr.

A Radyo Inquirer 990AM report said that the remains were brought into the plenary hall shortly before 9 a.m. after a 10-minute drive from the Arroyo’s home in La Vista Subdivision in Quezon City.

But while Aleli sat with the rest of the Arroyo family near the late lawmaker’s remains Ibuna was only allowed to stay at the VIP gallery. She sat there with her mother Linda Ibuna during the mass and necrological service.

Ibuna told Radyo Inquirer that she would accompany the Arroyo family when they bring Iggy Arroyo’s remains to Bacolod after the necrological rites at the House plenary hall, and back to La Vista by Thursday.

Iggy Arroyo died due to a liver ailment in London last January 26. His interment is set on Friday, March 9, at the Manila North Cemetery.