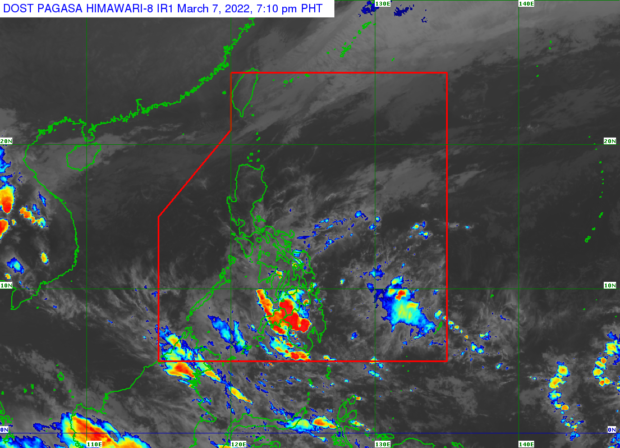 MANILA, Philippines — Rain is expected to occur over the entire Visayas and most parts of Mindanao on Tuesday due to the low-pressure area (LPA) east of Davao City, the Philippine Atmospheric, Geophysical and Astronomical Services Administration (Pagasa) said.

(The LPA is expected to continue to move westward and still affect the entire Visayas and most parts of Mindanao.)

(Cloudy skies, scattered rain, and lightning and thunder may be expected in Zamboanga del Norte, Northern Mindanao, Caraga, Davao Region and throughout the Visayas.)

Pagasa added that the trough of the LPA will bring overcast skies and rain over the Bicol Region.

Temperature range in key cities/areas nationwide on Tuesday, meanwhile, will be as follows:

The state weather bureau also said that it is raising a gale warning over the seaboards of Batanes, northern coast of Cagayan including Babuyan Islands, and northern coast of Ilocos Norte due to the effects of the northeast monsoon, which is locally termed as amihan.

Perez said that rough to very rough sea conditions could be expected in these areas.