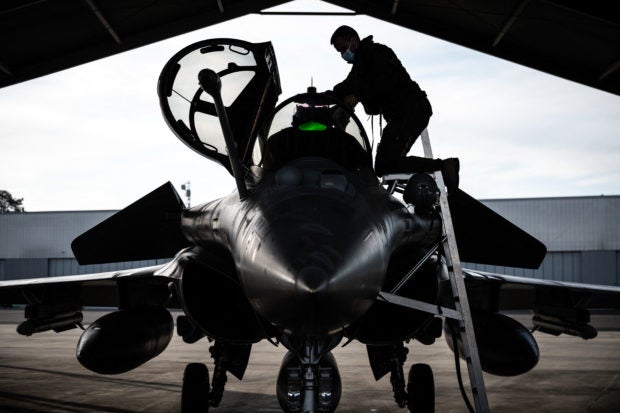 A Rafale fighter jet pilot inspects his aircraft prior to taking off for a daily Nato border watch mission sortie over Poland at the Mont-de-Marsan airbase, southwestern France, on March 1, 2022. AFP FILE PHOTO

MOSCOW — Russia on Sunday warned Ukraine’s neighbors including Nato member Romania against hosting Kyiv’s military aircraft, saying they could end up being involved in an armed conflict.

“We know for sure that Ukrainian combat aircraft have flown to Romania and other neighboring countries,” defense ministry spokesman Igor Konashenkov said in a video briefing.

“The use of the airfield network of these countries for basing Ukrainian military aviation with the subsequent use of force against Russia’s army can be regarded as the involvement of these states in an armed conflict,” he added.

“It’s pure rhetoric designed to divert attention from what is really happening on the ground — civilians killed, the rules of armed conflict flouted,” Romania’s Prime Minister Nicolae Ciuca said during a television interview.

Moscow could try all they want to scare Romania, he added, but “we have no reason to feel threatened”.

Ciuca raised an incident reported by the Romanian military on February 24, the first day of the conflict, when a Ukrainian fighter jet was intercepted in Romanian airspace and forced to land.

The pilot told the Romanian authorities that the incursion and been due to a technical problem.

His jet was allowed to leave, unarmed, a few days later and the incident had been made public — “in all transparency” — precisely to avoid any misunderstanding with Moscow, Ciuca added.

Konashenkov also claimed that “practically all” Ukraine’s combat-ready aircraft had been destroyed.

Russian President Vladimir Putin has warned that Moscow will consider any country imposing a no-fly zone over Ukraine to have entered into the military conflict.