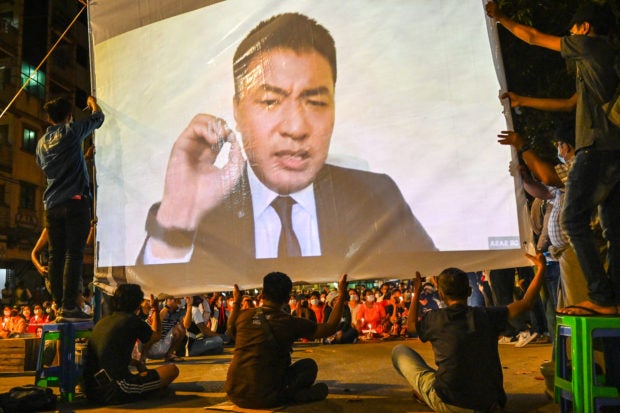 In this file photo taken on March 13, 2021, protesters watch as a video showing Dr Sasa is projected on a screen during a night-time demonstration against the military coup in Yangon. AFP

Ousted lawmakers formed the “National Unity Government” weeks after the military’s power-grab last year, and have vowed to overturn the coup.

The NUG has since been declared a “terrorist” organisation by the junta.

The group had “violated the existing laws of the State and… found to be committing acts that could harm the interests of Myanmar,” according to a junta notice in state newspaper Global New Light of Myanmar.

“Similar perpetrators will be identified and prosecuted,” the notice from the military added.

The NUG holds no territory and has not been recognised by any foreign government with many of its members in hiding or exile.

Suu Kyi — nominated as its head — has been detained since the coup and faces a barrage of charges that could jail her for more than 150 years.

Myanmar has been in turmoil since the coup and a subsequent military crackdown on dissent that a local monitoring group says has killed more than 1,600 people.