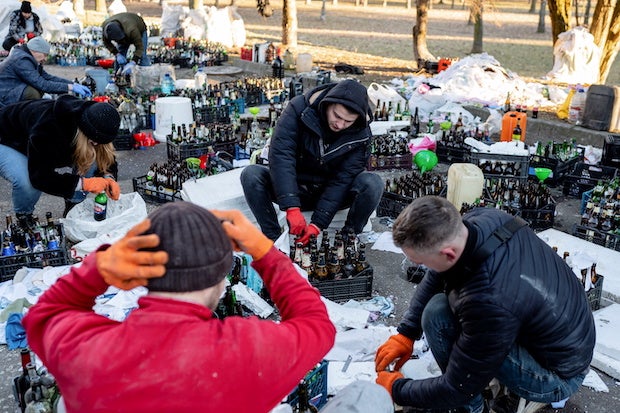 Brasília, Brazil — A Brazilian state lawmaker known for his social media antics said he had traveled to Ukraine to help the army make Molotov cocktails for use against Russian troops.

Arthur do Val, a Sao Paulo state legislator for the right-wing Free Brazil Movement (MBL), posted images of himself on Instagram sitting beside a mountain of glass bottles he said he was turning into weapons to help Ukraine fend off Russian forces.

“I never imagined one day I’d be making Molotov cocktails for the Ukrainian army,” he said in a video posted Thursday.

Do Val is known in Brazil for his YouTube broadcast, “Mamae Falei” (Mom, I Told You), which gained fame for its mocking depictions of left-wing activists during the political crisis that led to the impeachment of leftist president Dilma Rousseff in 2016.

But he is also a vocal opponent of far-right President Jair Bolsonaro, whom he has attacked for refraining from criticizing Russian President Vladimir Putin over the invasion.

Bolsonaro has said Brazil will maintain “neutrality” in the conflict.

Do Val said he had helped a unit near the Ukrainian-Slovakian border that made more than 75,000 petrol bombs.

Do Val’s office confirmed the lawmaker had traveled to Ukraine but said he would return to Brazil over the weekend to maintain his scheduled commitments in the legislature.

Dozens in pacifist Japan volunteer to fight for Ukraine