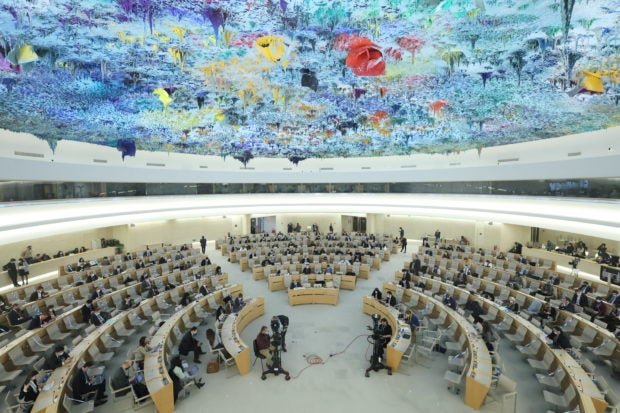 An overview of the special session on the situation in Ukraine of the Human Rights Council at the United Nations in Geneva, Switzerland, March 4, 2022. REUTERS/Denis Balibouse

GENEVA — The U.N. Human Rights Council voted overwhelmingly on Friday for a resolution condemning alleged rights violations by Russia during its invasion of Ukraine and setting up a commission of inquiry to investigate them.

Thirty-two members of the Council voted in favor of the resolution brought by Ukraine, and two – Russia and Eritrea – voted against, while 13 abstained.

The Geneva-based body cannot make legally binding decisions but its decisions send important political messages and can authorize probes, such as the one to be carried out by the three-person commission created by Friday’s vote.

Ukraine’s ambassador to the United Nations in Geneva, Yevheniia Filipenko, told the Council minutes before the vote that there was “irrefutable evidence of gross and systematic human rights violations as well as war crimes and crimes against humanity by Russia”.

“It is our common duty to ensure accountability by mandating the documentation and verification of Russia’s crimes and identification of those responsible,” she said.

Russia, which has called its actions since Feb. 24 a “special operation”, has denied targeting civilians in Ukraine.

Its delegate, Evgeny Ustinov, told the Council that the resolution’s backers “will use any means to blame Russia for the events in Ukraine”.

It was not immediately clear how the commission, which is set up for an initial period of one year, will work alongside an existing U.N. rights team in the country.

A team from the International Criminal Court (ICC) in The Hague left for “the Ukraine region” on Thursday to look into possible war crimes by all parties in the conflict, its top prosecutor told Reuters.