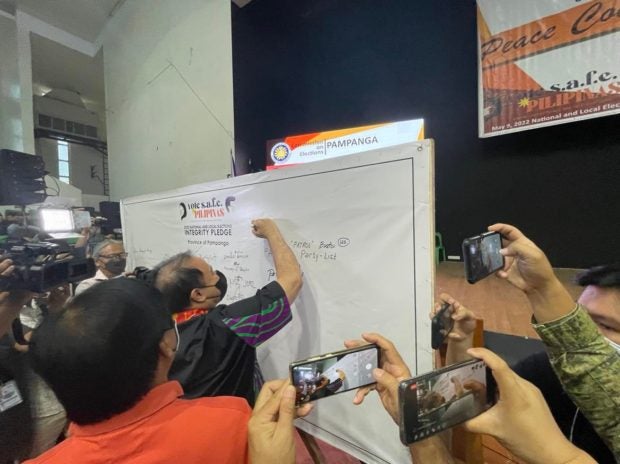 Pampanga Gov. Dennis Pineda signs the integrity pledge for secure, accurate, free, and fair elections during a ceremony organized by the Commission on Elections on Friday, March 4 (Photo by Tonette Orejas)

CITY OF SAN FERNANDO, Pampanga––At least 336 of the 524 local candidates in Pampanga province signed Friday, March 4, an integrity pledge, committing to secure, accurate, free, and fair elections (SAFE) on May 9.

The pledge, prepared by the Commission on Elections (Comelec), was earlier signed by former President Gloria Macapagal-Arroyo, who is running unopposed for a congressional seat in the second district.

Gov. Dennis Pineda and his allies in the local party, Kambilan, came in full force.

It was not known why the other 188 bets did not come to the event, said Myrvi Fabia, provincial director of the Department of the Interior and Local Government.

Pampanga has no election hotspot, according to Rommel Rama, Comelec provincial election director.

In a statement, Pineda expressed hope that the elections would be peaceful and orderly. He had asked voters to respect choices and stay cool. INQ