Ukraine’s emergency services said it had regained access to the facility after accusing the Russian military of initially blocking rescuers from reaching the blaze.

“As of 05:20 at the Zaporizhzhia NPP in Energodar, State Emergency Service units went to put out the fire in the training building,” the state emergency services wrote on Facebook.

“It was established that the premises on the third, fourth and fifth floors were on fire,” it said of the five-storey building.

There were no reported victims, and 44 people and 11 vehicles were involved in the extinguishing operation, it added. 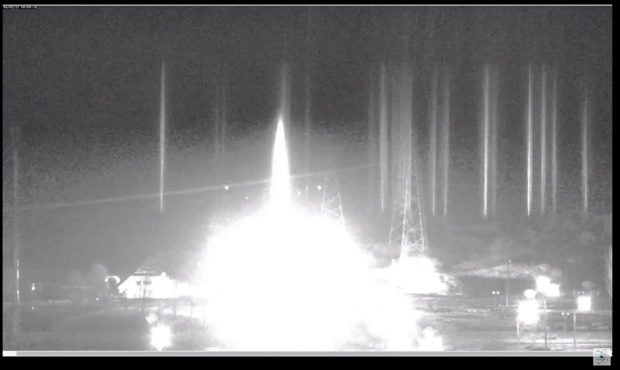 An image grab from footage obtained from a livestream from the Zaporizhzhia Nuclear Authority on March 4, 2022 shows multiple blasts at key a Ukrainian nuclear plant in Zaporizhzhia from Russian shelling. (Photo by ZAPORIZHZHIA NUCLEAR AUTHORITY / AFP)

Zelensky had earlier begged world leaders to wake up and prevent Europe from “dying from a nuclear disaster” after Russian forces shelled the continent’s largest plant.

“No country other than Russia has ever fired on nuclear power units,” he said in a video message released by his office. “This is the first time in our history. In the history of mankind. The terrorist state now resorted to nuclear terror.”

He accused the troops of knowingly firing on the nuclear facility.

“These are tanks equipped with thermal imagers, so they know where they are shooting,” said Zelensky.

The station at Zaporizhzhia, an industrial city in the southeast, supplies an estimated 40 percent of the country’s nuclear power and, according to Zelensky, houses six of Ukraine’s 15 reactors.

Ukrainian emergency services had earlier raised alarm that Russian troops were preventing them from reaching the fire at the plant.

“The invaders are not authorising Ukrainian public rescue units to begin extinguishing the fire,” the emergency services said on Facebook, stating that the blaze had affected a “training building” and that only one of the reactors was operational.

Local officials had reassured the UN’s atomic watchdog that “essential” equipment at the station was unaffected and radiation levels were normal.

Ukraine’s nuclear facilities have been a main point of concern after Russia’s military invaded the country last week and began bombarding cities with shells and missiles.

“If there is an explosion, it is the end of everything. The end of Europe,” Zelensky warned. “Only immediate European action can stop Russian troops.”