Relief for consumers: No more 12% VAT in water bill 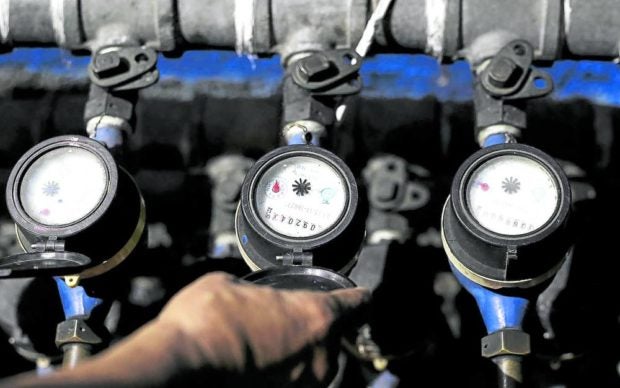 PRECIOUS DROP Manila Water and Maynilad customers may expect a reduction in their monthly bills starting this month, but a national and local franchise tax ranging from 0.5 to 2.825 percent would still be imposed. —RICHARD A. REYES

MANILA, Philippines — Customers of Maynilad Water Services Inc. and Manila Water Co. Inc. can expect a reduction in their monthly water bills beginning this March following the changes in the concession agreements of the two private utility providers.

The Metropolitan Waterworks and Sewerage System Regulatory Office (MWSS-RO) announced on Thursday the new tax regime removing the 12-percent value-added tax (VAT) in the water bill, although a national and local franchise tax ranging from 0.5 to 2.825 percent would still be imposed.

According to Patrick Ty, chief regulator of the MWSS-RO, water bills would be cut by 9.175 to 10 percent, depending on the franchise tax rate to be imposed by local government units (LGUs).

This means that for an average household with five members consuming 20 cubic meters a month, the usual monthly rate of P130.42 for Maynilad customers will go down to P118.78, and to P138.40 from P151.22 for Manila Water clients.

Ty noted that the MWSS-RO did not have the power to regulate the local tax rates to be imposed by LGUs, although a cap has to be followed under the local government code.

The new local and national taxes to be slapped on consumer bills will be reflected as “government tax” in the billings beginning March 21.

Maynilad and Manila Water are the two concessionaires tapped by the government to operate the water utilities in Metro Manila and nearby provinces during the privatization of the MWSS in 1997.

When it was operated by the government, the MWSS faced problems such as poor coverage, inefficient service, and high non-revenue water caused mainly by meter tampering, illegal connections, pipeline leaks, and illegal use of fire hydrants.

Maynilad manages and operates the water and wastewater services in the cities of Manila (except San Andres), Pasay, Parañaque, Caloocan, Muntinlupa, Las Piñas, Valenzuela, and parts of Makati and Quezon City, including the municipalities of Navotas and Malabon, while its franchise area covers Cavite City and its municipalities Bacoor, Imus, Kawit, Noveleta and Rosario.

The new franchises come months after the two companies signed revised concession agreements with the government in response to Duterte’s outrage over what he called “unfair” provisions of their previous deals with the MWSS.

The President was further angered by the Singapore arbitration ruling in 2019 requiring the government to pay Manila Water some P7 billion in losses allegedly due to the inaction of the MWSS on its rate hike petitions. Maynilad had also won a similar arbitration suit.

However, Manila Water and Maynilad decided to waive the arbitration award after the President threatened to file charges against their owners. Businessman Manuel Pangilinan’s Metro Pacific Investments Corp. owns a controlling stake in Maynilad, while ports tycoon Enrique Razon had taken over control of Manila Water from the Ayalas.

In January 2020, the President told the two companies to accept the new concession agreements drafted by the Department of Justice or he would charge their executives.

The new concession agreements removed the guarantee of earnings from investments and the non-interference clause, which had kept the government out of the discussion on setting of water rates, that had been criticized by the President.

Under the new laws, Maynilad and Manila Water’s operations should meet industry standards set under the Philippine Clean Water Act of 2000 and the country’s Water Code, and as specified in the concession agreement and related permits.

The new agreements also require the companies to conform with the “ethics of honest enterprise” and provide water supply and sewage services “in a prudent, efficient and satisfactory manner.”

They should also modify or improve their facilities, pipelines, and equipment for an efficient and reliable service at reasonable cost “as far as feasible and whenever required by the [MWSS-RO].”

The concessionaires should also charge “reasonable and just fees to all types of consumers and water users” and should not pass on to consumers the income taxes due from them, their successors, and assignees.

The two companies should ensure that service interruptions would be “minimal,’’ set up desks for consumer complaints and mechanisms for stakeholder consultations, as well as comply with their obligations under the Indigenous Peoples Rights Act that requires “free, prior and informed consent” of ethnic communities in certain cases.