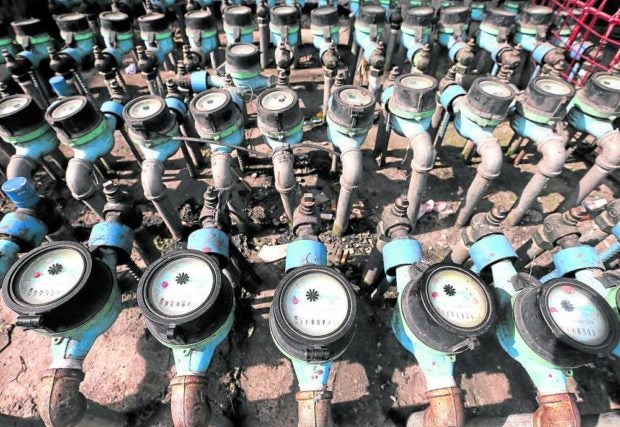 GO WITH THE FLOW A row of Manila Water meters servicing a slum area in Manila. —INQUIRER PHOTO

President Rodrigo Duterte has signed the laws granting a 25-year franchise each to Maynilad and Manila Water, more than two years since he started berating them over what he considered “onerous” provisions in their earlier concession agreements and threatening to jail their owners for “economic plunder.”

Mr. Duterte signed the measures on Dec. 10 but Malacañang released copies of the documents only on Friday.

Under the new laws, Maynilad and Manila Water’s operations should meet industry standards set under the Philippine Clean Water Act of 2000 and the country’s Water Code, and as specified in the concession agreement and related permits.

The companies should conform with the “ethics of honest enterprise” and provide water supply and sewage services “in a prudent, efficient and satisfactory manner.”

They should also modify or improve their facilities, pipelines and equipment for an efficient and reliable service at reasonable cost “as far as feasible and whenever required by the Regulatory Office.”

The concessionaires are to charge “reasonable and just fees to all types of consumers and water users” and should not pass on to consumers the income taxes due from them, their successors and assignees.

The laws also said the regulatory office, with the approval of the government-run Metropolitan Waterworks and Sewerage System (MWSS) board of trustees, should “establish tariffs, rates and other charges that are fair and reasonable, and ensure economic viability and a fair return on investment.’’

The two companies should ensure that service interruptions would be “minimal,’’ set up desks for consumer complaints and mechanisms for stakeholder consultations, as well as comply with their obligations under the Indigenous Peoples Rights Act that requires “free, prior and informed consent” of ethnic communities in certain cases.

The new franchises also require Maynilad and Manila Water to submit an annual report to Congress on their operations on or before April 30 of every year. A P1-million fine will be charged for each working day of noncompliance.

The MWSS is authorized to approve the amendment of the concession agreement to extend its term up to the term of the franchise.

In a statement on Friday, Maynilad’s corporate communications chief Jennifer Rufo said: “We thank the President for signing the franchise granted to us by Congress to provide water and wastewater services in our service area. With the continuing requirements of economic development and a growing population, the security and stability of a long-term franchise will give Maynilad the strength and ability to continue to invest in the water infrastructure the country needs.”

“The new franchise also gives MWSS the right to extend the expiry of our concession agreement to match the term of the franchise as long as it is beneficial to our customers and we intend to pursue this option,” Rufo added.

There was no immediate statement from Manila Water.

The President started publicly castigating the water concessionaires in December 2019, calling their owners “oligarchs” and accusing them of faking a water crisis in Metro Manila for more profit. He once threatened to charge them with economic sabotage over the so-called onerous contracts with the government which were sealed in 1997 under the Ramos administration.

Manila Water Co. was then a subsidiary of the Zobel family’s Ayala Corp. Ports tycoon Enrique Razon Jr. now heads the company, taking the reins from the Zobels after reaching a subscription agreement that gave him majority voting rights.

The Manuel V. Pangilinan-led Metro Pacific Investment Corp. owns a controlling stake in Maynilad, along with the Consunjis.Mr. Duterte earlier ordered Solicitor General Jose Calida and Finance Secretary Carlos Dominguez III to come up with a new water concession contract that he said should be favorable to the public and the government.

In March the following year, the President expressed a willingness to resolve the conflict with the two concessionaires in the country, but said there was still no assurance that their owners would not be prosecuted for graft or plunder.

In May that year, during the first months of the coronavirus pandemic, Duterte apologized to the Zobels and Pangilinan for his “hurtful words,” saying the COVID-19 crisis had “humbled” him.

The Zobels, Pangilinan and other business leaders at this point had started helping the government buy protective equipment for health-care front-liners. They would later help also in the procurement of vaccines.

On May 5, 2020, Malacañang said an “out-of-court settlement” was possible between the government and the concessionaires.

In separate statements, Pangilinan and Zobel accepted the President’s apology and vowed to continue helping in the pandemic response.

In June 2020, the President said he was “OK” with granting concession agreements to Manila Water and Maynilad as long as they “pay back” the money “the people lost.” —With reports from Inquirer Research and Jordeene B. Lagare