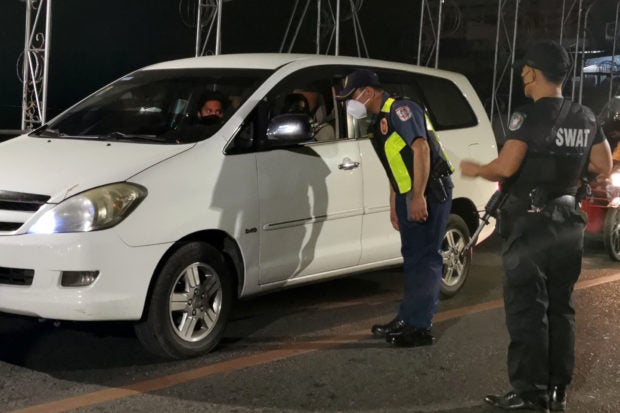 Policemen inspect a vehicle at a Comelec checkpoint along the Quintos bridge in Downtown Dagupan City at the start of the election gun ban on Monday, January 10, 2022. INQUIRER file photo / Willie Lomibao

MANILA, Philippines – A total of 1,554 violators have so far been arrested amid the Commission on Elections’ (Comelec) nationwide gun ban ahead of the national elections, the Philippine National Police (PNP) reported Wednesday.

According to the PNP’s data, of the 1,554 persons arrested, 1,496 are civilians, 21 are security personnel, 15 are from the police force, and nine are from the Armed Forces of the Philippines.

The arrests came from 1,443 operations conducted by the PNP from January 9 to March 2 this year.

Moreover, the PNP said 1,209 firearms and 6,759 ammunition have been confiscated in these operations while 555 deadly weapons were also recovered.

The PNP provided a breakdown of regions in the country with the most number of arrests as of March 2.

The PNP said in terms of the number of arrested persons, Metro Manila topped with 534 arrested violators. This is followed by Region 7 with 178 arrested violators; Region 4A with 173; Region 3 with 163; and Region 6 with 82.