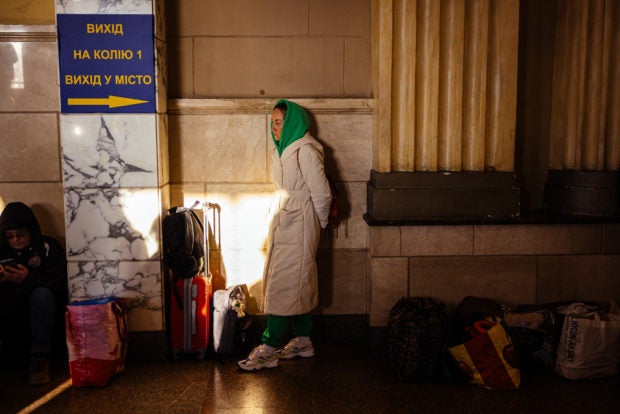 Here are the latest developments in Russia’s war in Ukraine:

Satellite images show a vast military column amassing just north of the Ukrainian capital Kyiv, where residents are braced for a Russian assault.

The Russian army tells them they can “freely leave” on one highway going south as it hints of attacks on civilian areas.

An AFP journalist in the city sees a destroyed school, burned out Russian armoured vehicles and corpses of Russian soldiers after earlier fighting.

Russian forces reach the southern city of Kherson near Moscow-controlled Crimea, setting up checkpoints on its outskirts, its mayor says. Moscow claimed to have besieged the city two days ago.

Kyiv says 352 civilians have been killed, including 14 children, since the invasion began last Thursday.

Half a million refugees

Nearly 520,000 people have fled Ukraine in the last five days, the UN’s refugee agency says, with tens of thousands more displaced inside the country.

International Criminal Court prosecutor Karim Khan says he is investigating the “situation in Ukraine”, saying there is a “reasonable basis” to believe “war crimes and crimes against humanity have been committed” since 2014.

Turkey blocks warships from the Bosphorus and Dardanelles strait, limiting the movement of Russian and other naval assets by invoking a 1936 treaty.

Negotiators from Ukraine and Russia end a first round of talks with no breakthrough. Both sides agree to conduct a second round “soon”.

In a call with French President Emmanuel Macron, Russian leader Vladimir Putin demands the “demilitarization and denazification” of Ukraine and that the West recognise his annexation of Crimea.

The head of the UN atomic energy watchdog, the IAEA, expresses “grave concern” that invading Russian troops are operating close to Zaporizhzhia, the largest nuclear power station in Ukraine.

Russia kicked out of World Cup

Russia is expelled from the 2022 World Cup and its teams suspended from all international football competitions “until further notice”, FIFA and UEFA say.

The International Olympic Committee urges sports federations to ban Russian and Belarusian athletes in protest at the invasion.

The United States moves to expel 12 members of Russia’s UN mission from America for being “intelligence operatives”.

The US and Canada ban all transactions with Russia’s central bank in an unprecedented sanction.

Putin orders emergency capital controls and forces exporters to buy rubles to prop up the currency, which plunges by a fifth, reaching record lows.

Lawmakers in traditionally non-aligned Finland — which has a long border with Russia — are to debate Nato membership. It comes after Helsinki took a “historic” decision to supply weapons to Ukraine.

Disney and Sony Pictures stop the release of their films in Russian cinemas because of its invasion of Ukraine.