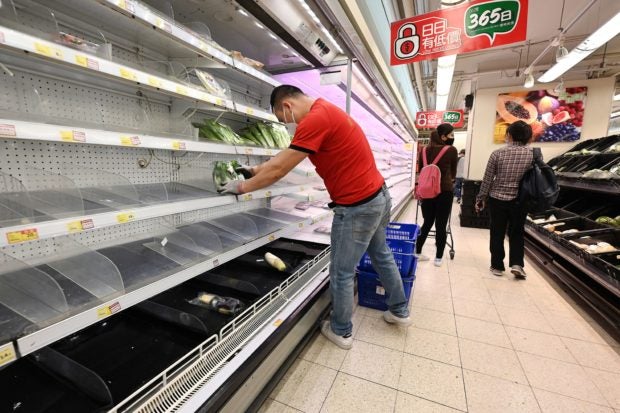 A worker (L) refills empty shelves at a supermarket in Hong Kong on March 1, 2022, as panic buying returned to the city with many supermarket shelves stripped bare following mixed messaging from the government over whether it plans a city lockdown later this month when it tests all residents. AFP

HONG KONG — Hong Kongers stripped supermarket shelves bare Tuesday as panic buying set in following mixed messaging from the government over whether it plans a lockdown this month.

Uncertainty over Covid rules has sent the city’s residents flocking to supermarkets, chemists and vegetable stores to stock up, leaving shelves empty across the city.

The financial hub is currently in the grips of its worst coronavirus outbreak, registering tens of thousands of new cases each day, overwhelming hospitals and shattering the city’s zero-Covid strategy.

Authorities plan to test all 7.4 million residents this month and isolate all infections either at home or in a series of camps that are still being constructed with the help of mainland China.

City leader Carrie Lam had initially ruled out a mainland style lockdown where people are confined to their homes during the testing period.

But on Monday, health chief Sophia Chan confirmed it was still on the table, a day after a senior Chinese health official described it as the best option.

One of the most densely populated cities on earth, Hong Kong’s supermarkets have limited backroom storage space and saw waves of panic buying at the start of the pandemic two years ago.

The vast majority of its food is imported from mainland China and the current supply crunch has been worsened by cross border truckers getting infected by the high transmissible Omicron variant.

More than 190,000 infections have been recorded in the last two months compared to just 12,000 for the rest of the pandemic.

The government released a statement late Monday saying food supplies remained constant and that there was no need for panic buying.

But analysts said uncertainty and distrust were fuelling consumer habits.

“We have so many questions but all answers are ‘to be confirmed’,” Chan Ka-lok, an international politics scholar at Baptist University, wrote on social media.

“Rush to buy and stock up, let the people decide how to live their life.”

If only 1,000 journalists hadn’t been put out of work last year & efforts were instead directed at Omicron prep & vaccination. https://t.co/wcvx6VhEyG

Faith in government assurances is low in Hong Kong, where authorities have carried out a two year crackdown on dissent after huge democracy protests.

The decision to mass test residents was also itself a policy u-turn — Lam had previously ruled out such a step before backing it last month.