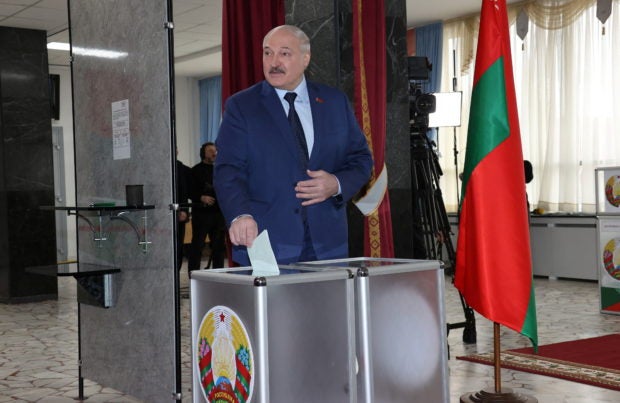 Belarusian President Alexander Lukashenko casts his ballot at the referendum on the amendments and additions to the Constitution of Belarus, in Minsk, Belarus February 27, 2022. Nikolay Petrov/BelTA/Handout via REUTERS

A referendum in Belarus on Sunday approved a new constitution ditching the country’s non-nuclear status at a time when the former Soviet republic has become a launch pad for Russian troops invading Ukraine, Russian news agencies said.

The agencies cited the Belarus central elections commission as saying 65.2% of those who took part voted in favor. The result came as little surprise, given the tightly controlled rule of President Alexander Lukashenko.

The new constitution could see nuclear weapons on Belarusian soil for the first time since the country gave them up after the fall of the Soviet Union.

It raises the stakes at a time when Lukashenko has fallen behind Russian President Vladimir Putin’s military assault on Ukraine after earlier playing an intermediary role between the two neighbors.

The West has already said it will not recognize the results of the referendum, which is taking place against the background of a sweeping crackdown on domestic opponents of the government. According to human rights activists, as of Sunday, there were more than a thousand political prisoners in Belarus.

Protests had largely died down in Belarus after Lukashenko launched a violent crackdown on dissent against his 28-year-long rule. Mass protests had erupted in 2020 following a disputed election that opponents say Lukashenko rigged.

On Sunday, speaking at a polling station, Lukashenko said he could ask Russia to return nuclear weapons to Belarus.

“If you (the West) transfer nuclear weapons to Poland or Lithuania, to our borders, then I will turn to Putin to return the nuclear weapons that I gave away without any conditions,” Lukashenko said.

Lukashenko turned to Russia after the 2020 protests, securing loans that offset the effect of Western sanctions.

His rival in the 2020 vote, exiled opposition leader Sviatlana Tsikhanouskaya, had called on Belarusians to use the vote to protest against the invasion.

In videos and photos posted on social media, people gathered at polling stations in Minsk and other cities to protest.

“There is little we can do now, with all this terror and horror in which we live. But I wouldn’t forgive myself if I didn’t try to do something,” said Elena, 45. She declined to provide more personal information for security reasons.

The new constitution would give powers to the All-Belarusian People’s Assembly, created by Lukashenko and populated by party loyalists, local councils, officials and activists of pro-government organizations.

It would also give lifetime immunity from prosecution to the president once he left office.