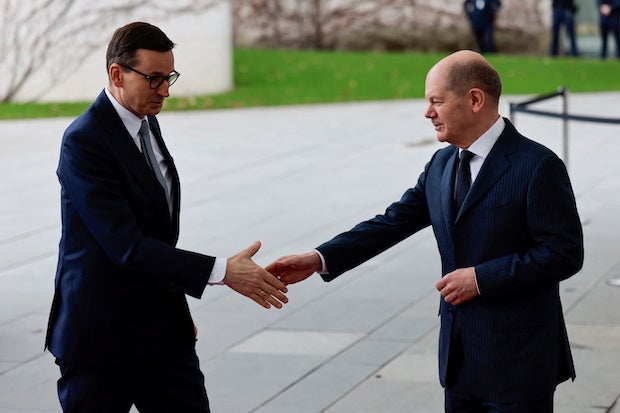 WARSAW/VILNIUS — Leaders from Poland and Lithuania urged the European Union on Saturday to go further in their support for Ukraine in the face of a Russian invasion, as they headed into a meeting with German Chancellor Olaf Scholz.

Polish Prime Minister Mateusz Morawiecki said all sanctions against Russia should be on the table, including shutting the Nord Stream pipelines that supply Russian gas to Europe and halting its access to the SWIFT global payments system.

Poland and Lithuania both share borders with Russia and Belarus, while Poland also borders Ukraine.

“I came to Berlin to shake the conscience of Germany so that they would finally decide on truly harsh sanctions that will influence the Kremlin’s decisions,” Morawiecki told reporters outside Scholz’s office.

“We need to shut down Nord Stream 1 and 2, we need to cut reliance on raw materials, cut off Russian financial institutions from capital markets, confiscate assets of oligarchs, close off SWIFT for Russia… All sanctions against Russia should be on the table.”

Speaking alongside Morawiecki, Nauseda said he would ask Scholz to support giving Ukraine the status of a EU candidate country and sending it significant military help.

“I talked to Zelenskiy on the way here, and he said that European perspective would be a large motivation to Ukrainians to fight for their and their children’s future,” said Nauseda.

“And it is important to provide real military help to Ukraine now. This is most important … we need a quick decision,” he added.