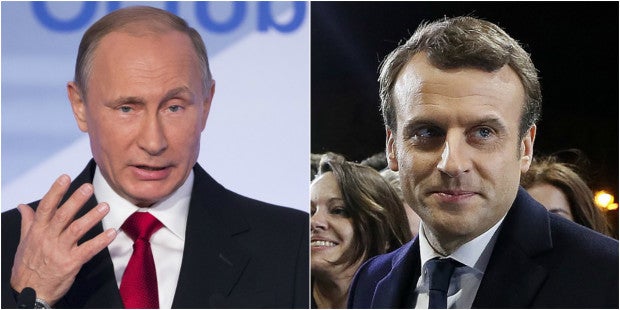 “After having spoken with the Ukrainian president, and in coordination with him, the president (Macron) called Vladimir Putin to demand the immediate halt of Russian military operations, noting that Russia risked massive sanctions,” the Elysee said as Macron attended an EU summit in Brussels.

The account by Macron’s aides contrasted with that given by the Kremlin, which said only that the two leaders had a “serious and frank exchange of views” about Ukraine.

The Kremlin said in a statement that Putin gave an “exhaustive” explanation to Macron of the reasons he ordered his forces into his pro-Western neighbor.

Macron has emerged as the West’s point man in speaking with Putin, keeping open a channel of dialogue in the hope of bringing diplomacy to bear.

Earlier Thursday, the French president told his nation: “We will respond without weakness to this act of war.”

He added that the Russian attack on Ukraine marked a “turning point in the history of Europe and our country” that would have “deep and lasting consequences for our lives.”

At the EU summit, Macron and other leaders swiftly agreed to a new, “severe” package of sanctions against Russia for its actions.

According to a summit declaration, “these sanctions cover the financial sector, the energy and transport sectors, dual-use goods as well as export and export financing” of Russia, as well visas and adding more Russian individuals to the EU’s travel ban and asset freeze list.