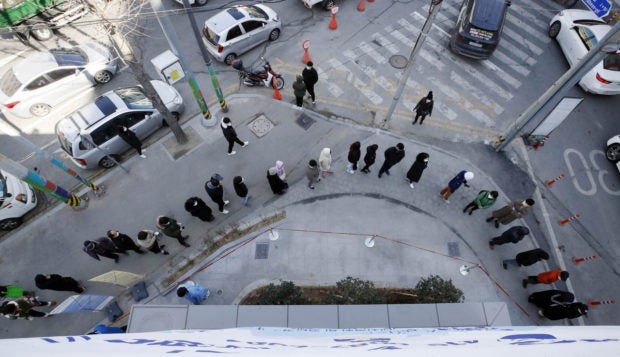 People wait in line to receive tests at a COVID-19 testing station in the southwestern city of Gwangju yesterday, in this photo provided by a local government. (local government via The Korea Herald/Asia News Network)

SEOUL — South Korea’s new COVID-19 infections soared to hit another high of over 170,000 on Wednesday, nearly doubling from a week earlier, as the highly contagious Omicron variant continued to spread across the country.

The country reported 171,452 new COVID-19 infections, including 171,271 local cases, raising the total caseload to 2,329,182, according to the Korea Disease Control and Prevention Agency (KDCA).

This marked a drastic surge from the previous day’s 99,573 and is far higher than the previous record of 104,814 tallied Sunday.

Behind the surge lies the fast spread of the Omicron variant, which became the dominant variant in South Korea late last month. The daily tally nearly doubled in a week, and it grew nearly fourfold compared with two weeks ago.

The number of critically ill COVID-19 patients came to 512, up 32 from a day earlier. The figure has been on a rise recently, climbing from around 200 cases early last week to over 400 on Saturday and further to more than 500 on Wednesday.

The death toll from COVID-19 came to 7,607, up 99 from Tuesday. It is the fourth-highest number of daily deaths from the new coronavirus. The fatality rate was 0.33 percent, according to the KDCA.

The health authorities have said that the Omicron wave could reach a peak by early next month with the daily caseload rocketing up to 270,000. Experts also forecast that serious cases would jump to more than 1,000 by that time.

The upsurge in total infections also pushed up the number of patients receiving at-home treatment to an all-time high of 521,294 on Wednesday. The figure more than doubled in a week, and could surpass 1 million next week, according to KDCA officials.

In the wake of the Omicron wave, the country adopted an enhanced at-home treatment system to better focus on serious cases and vulnerable people. (Yonhap)

How South Korea went from ‘test, trace, treat’ to ‘let it spread’