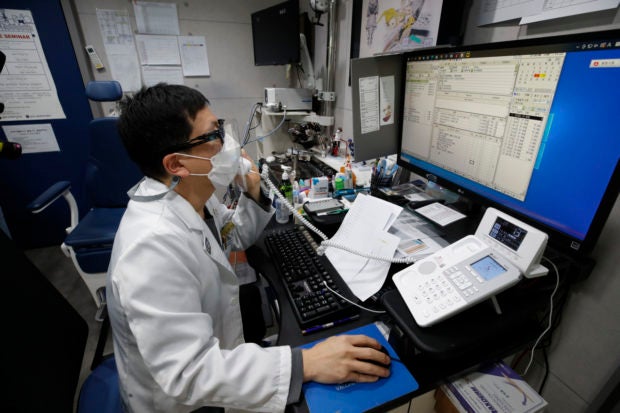 A primary physician speaks with home-isolating patients over the phone. From Feb. 10 the remote monitoring is offered only to patients 60 and older. (Yonhap via The Korea Herald/Asia News Network)

SEOUL — South Korea stopped monitoring COVID-19 patients younger than 60 beginning Feb. 10 in a switch to what is known as a self-care scheme, after the milder omicron overtook delta as the dominant strain here.

But following deaths among younger patients isolating at home, concerns are rising over possible safety oversights in the new system.

According to health authorities Monday, at least two patients died in the Seoul area while in home isolation over the weekend.

In Suwon, Gyeonggi Province, a 7-month-old baby died at 9:17 p.m. on Sunday while being rushed to an emergency room for a high fever. The first responders got to the baby within 6 minutes of getting the call, but struggled to find an available bed. After traveling some 40 minutes to a hospital 10 kilometers away, the baby was pronounced dead on arrival.

On Saturday, a man in his 50s was found dead at home in Gwanak-gu, western Seoul, where he was isolating two days after testing positive. His family had last contacted him a day before he died, and called for help when he could not be reached. When first responders got to him he was already dead.

Son Young-rae, the Ministry of Health and Welfare’s spokesperson, told reporters during a virtual briefing that an investigation was underway to see the cause for delay in getting the baby to the hospital.

The Seoul man would not count as an out-of-hospital death as he died before the district public health center could register him, Son added.

The other known recent instance of a home-isolating patient dying before they could get care is a 70-something man who left home isolation in Incheon. He was found dead at a public bathhouse.

Dr. Paik Soon-young, an emeritus professor of microbiology at Catholic University of Korea, said the series of cases of deaths in less than two weeks since the switch to the self-care scheme highlighted possible oversights.

“Patients are left on their own and they don’t know where to seek help. With beds becoming scarce again, it will be a challenge to respond to the emergencies,” he said.

Read Next
Seoul city to provide online street view service of all 14,699 alleys
EDITORS' PICK
What to watch out for when selecting a video surveillance solution
Heads may roll at BOC, says Palace if sugar smugglers are allowed to use recycled import permits
vivo brings to the Philippines a powerful smartphone with a slimmer body, the vivo Y02s for only PHP 6,499
Palace: Biggest supermarkets in PH commit to sell sugar at P70 per kilo
DOH reports increase in daily COVID-19 deaths, mostly unvaxxed
House energy committee chair Arroyo bats for cheap electricity
MOST READ
DepEd to give teachers P5K cash allowance within first week of classes
Brian Poe-Llamanzares receives his PhD in Public Administration
LPA east of Luzon may intensify into tropical cyclone
GSIS cool to idea of lowering retirement age in PH
Don't miss out on the latest news and information.