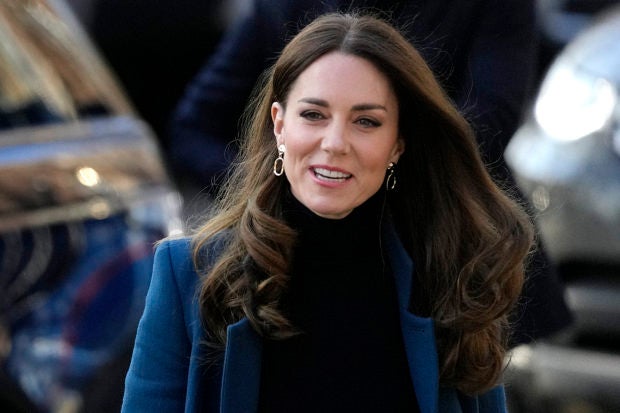 Britain’s Catherine, the Duchess of Cambridge, arrives to visit the Foundling Museum in London on January 19, 2022. AFP FILE PHOTO

COPENHAGEN — The Duchess of Cambridge kicked off a rare solo visit to Denmark on Tuesday, where she will spend two days with officials exchanging ideas about early childhood education and meeting Danish royals.

The 40-year-old Kate was to promote her work with her Royal Foundation Centre for Early Childhood, and learn about Denmark’s approach.

Dressed in a bright red blazer and black wide-leg trousers, the mother-of-three made her first stop on Tuesday at Copenhagen University, where she toured its Infant Mental Health Program.

She then met with health care personnel and families at The Children’s Museum, before heading to the Lego Foundation’s “PlayLab”.

In a message posted on Twitter earlier this month announcing her trip, Kate wrote that she was “looking forward to learning from experts, parents and practitioners about Denmark’s approach to early childhood”.

“Denmark is a beacon of best practice in its approach to the early years, with a culture which prioritizes the best start in life”.

She is scheduled to meet Wednesday with Denmark’s Queen Margrethe, who is celebrating her 50th jubilee this year, and Australian-born Crown Princess Mary, as well as visiting a kindergarten and a crisis centre for victims of domestic violence.

Kate last visited Denmark in 2011, with her husband Prince William, son of heir to the British throne Prince Charles.

Tuesday’s visit comes at a difficult time for the British royal family, with Princes Andrew and Charles mired in scandal, tensions over Prince Harry, and concerns about the health of 95-year-old Queen Elizabeth, who recently tested positive for Covid.

Amid those troubles, Kate’s popularity has soared.

An Ipsos poll last week showed the duchess was Britons’ second-favorite member of the royal family behind the queen, whom 45 percent chose as their favorite.

Kate was the preferred royal of 34 percent, beating out her husband who was in third place with 31 percent.