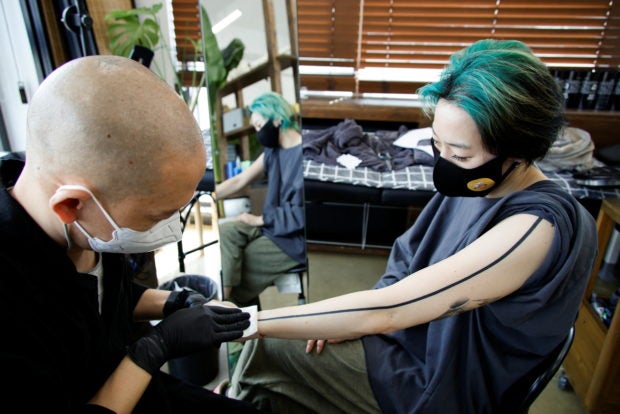 SEOUL — Doy, one of South Korea’s most famous tattoo artists having inked the likes of Brad Pitt, just wants to practice his craft without fear of going to jail or hefty fines.

South Korea is the sole developed country in the world where tattooing is considered a procedure that only medical professionals are capable of legally performing.

That leaves almost all of the country’s 50,000 tattoo artists at the mercy of potential police raids and prosecution, facing fines of up to 50 million won ($42,000) as well as prison terms, in theory as much as life.

Doy, who like many fellow tattooists practices from a modest building with no signage, was himself fined 5 million won ($4,180) last year after a video of him inking a popular Korean actress went viral. The 43-year-old has appealed the ruling. A survey conducted by the union of 650 tattoo artists Doy leads has also found six cases since last April of artists being sentenced to jail – usually for two years.

But change could well be on its way.

Over the last 10 years, tattoos have become increasingly popular among young South Koreans. BTS band member Jungkook famously has several and while tattoos are usually covered up on TV, celebrities have not been reticent about showing them off on social media. At the same time, appreciation for “K-tattoos”, often distinguished by fine-line drawing, intricate detail and bold use of color, has grown at home and abroad.

That has not escaped the attention of the ruling party’s candidate for the March 9 presidential election, Lee Jae-myung. In a move seen as courting young voters, Lee last month said it made no sense for the industry to be illegal, noted it was worth an estimated $1 billion and promised to back bills now pending in parliament to legalize tattooing.

“I’m really grateful for the pledge. It’s probably the best artistic inspiration that tattooists have had recently,” Doy, whose real name is Kim Do-yoon, said at his parlor.

Lee currently trails Yoon Suk-yeol from the conservative main opposition People Power Party, 34% to 41%, according to a public opinion poll by Gallup Korea. Yoon’s party has not yet decided its position on traditional tattoos but supports legalizing so-called cosmetic tattoos, which are semi-permanent and popular in South Korea for enhancing eyebrows, eyelines and hairlines.

Ahn Cheol-soo, a third candidate with 11% support who has had his eyebrows tattooed to look bushier, has not announced his position on the matter.

Public support for legalizing the industry appears to be growing.

According to a Gallup Korea poll last year, 81% of South Koreans in their 20s and about 60% of those in their 30s and 40s are in favour of legalization.

About 3 million people in South Korea have at least one tattoo and if semi-permanent cosmetic tattoos are counted that rises to 13 million, according to a 2018 estimate by a local medical device maker the Standard.

But for many of South Korea’s older generation, tattoos are associated with gangs and go against the Confucian belief that altering the human body means disrespect to one’s parents.

The country’s main medical group, which contends tattooing with needles is an “invasive” procedure that can damage the body, also opposes legalization.

“Except for like covering scars, from a medical perspective, I think tattooing through needles is self-harm, not an expression of freedom,” Hwang Ji-hwan, a dermatologist and an advisor at the Korean Medical Association, told Reuters.

“We are trying to protect the public’s health,” he said.

Doy said many of his colleagues have already left to work overseas, some applying for an artist visa to the United States.

“Our country could have managed the industry better and grown it to add value to the economy. But it feels like we may have lost that timing so it is extremely sad,” he said.

South Korea-PH: The past and the future

Apo Whang-od behind the ink and lemon thorns

Why having a tattoo might not be the coolest idea