newsinfo / Headlines
Headlines
AMID FUROR OVER TAKEDOWN OF POSTERS 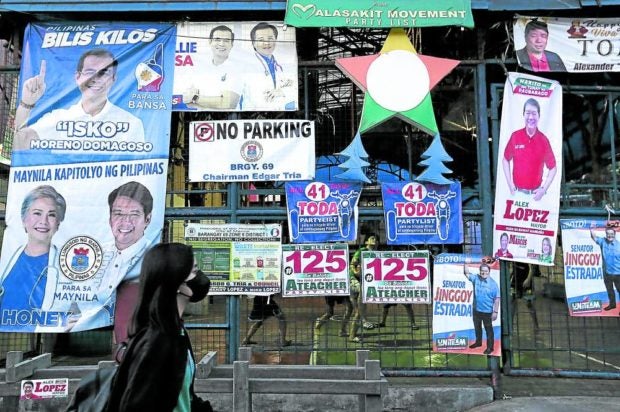 PLAY BALL | These candidates’ posters displayed outside a basketball court on Moriones Street in Tondo, Manila, can stay for now as the Commission on Elections reviews its rules on its much-criticized “Oplan Baklas” drive against oversized campaign materials. (Photo by RICHARD A. REYES / Philippine Daily Inquirer)

MANILA, Philippines — The Philippine National Police is meeting with the Commission on Elections (Comelec) to clarify the “gray area” in its election duties, particularly its role in the tearing down of illegal campaign materials.

The takedown of the supposedly illegal campaign materials within private property drew heavy flak for the PNP and the Comelec whose personnel now face administrative and even criminal complaints.

In an interview on Sunday at radio station dzBB, Fajardo reminded all PNP personnel that they are limited to providing security for Comelec workers involved in “Oplan Baklas” drive against oversized campaign materials.

Even then, she said that the matter needed to be clarified with the Comelec, particularly when the poll body seeks police assistance in enforcing election laws.

“What happened in Santiago City was that our policemen did not take down those campaign materials on their own. Based on the information we received, the election officer sought the help of the PNP officers because (the local Comelec office) was undermanned,” Fajardo explained.

“That’s the reason our police personnel were taking down the campaign materials,” she added.

Fajardo assured the public that the police personnel involved in the Santiago City incident were ready to take responsibility for any lapses that may have been committed.

“In fact, they were already reprimanded and (are) being investigated,” she said.

Fajardo pointed out that the police personnel’s taking part in actual “Oplan Baklas” operations was a “gray area” that needed to be clarified.

“We have to understand that the PNP is one of the deputized agencies of the Comelec as the authority on all election-related activities,” she said, adding that “the Comelec can tap the services of any government agency when the need arises.”

“What we need to determine is, being one of the deputized agencies, would the PNP personnel be in dereliction of their duty if they refused a request for assistance (from the Comelec)? That’s what we need to clarify,” she pointed out, referring to the Comelec’s “Oplan Baklas.”

Fajardo stressed that as far as the policy was concerned, “we are supposed to be limited to security coverage.”

Meanwhile, 10 lawyers in Capiz, including the president of the Integrated Bar of the Philippines (IBP) provincial chapter, have defended a Catholic Church-run school that was ordered by the Comelec to remove a tarpaulin of Vice President Leni Robredo, who is running for president.

In a three-page letter addressed to lawyer Rommel Benliro, Roxas City election officer, the 10 lawyers belonging to the Capiz Lawyers For Leni stressed that election paraphernalia placed inside private property by a noncandidate and with the owner’s permission “is beyond the powers of the Comelec to regulate.”

It cited the 2015 Supreme Court ruling on the case involving the Bacolod Diocese which upheld the legality of the tarpaulins displayed by the church against legislators who voted in favor of the reproductive health law.

The lawyers said in their letter that they have advised St. Anthony College to retain the tarpaulins within its private property and “to politely refuse to grant entry to any person who seeks to remove or destroy these tarpaulins.”

They also demanded the return of posters and other tarpaulins that were seized by the Comelec.