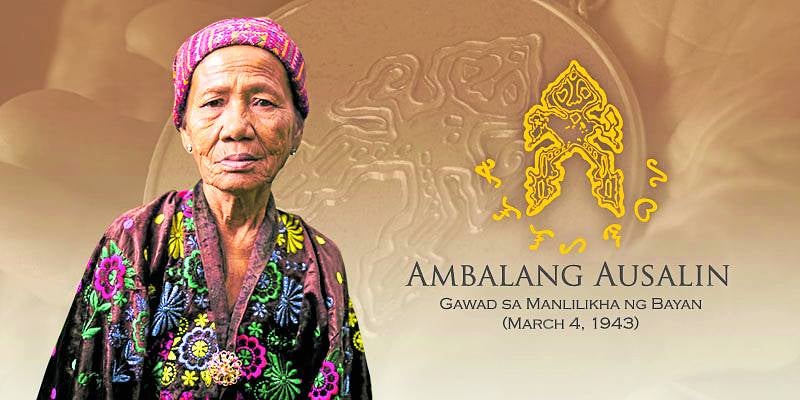 MANLILIKHA NG BAYAN Yakan master weaver Ambalang Ausalin is shown in this publicity photo released by the National Commission for Culture and the Arts when she was conferred the Gawad sa Manlilikha ng Bayan (National Living Treasures Award) in 2016 for her mastery of the craft of Yakan weaving.

ZAMBOANGA CITY—Apuh Ambalang Ausalin, a Yakan master textile weaver and one of the country’s 16 national living treasure awardees, passed away on Friday, local officials and the National Commission for Culture and the Arts (NCCA) said.

The NCCA said Ausalin died at 4 a.m. on Friday. She would have turned 79 on March 4.

Lamitan City Mayor Rose Furigay said Ausalin died in her residence in Barangay Parangbasak due to a long bout with pneumonia.

Ausalin was conferred the Gawad sa Manlilikha ng Bayan or National Living Treasures Award in 2016 for her mastery of the craft of Yakan weaving.

The NCCA said Ausalin was buried on Friday in accordance with Islamic funeral rites, among which is to inter the dead within 24 hours after death.Apuh Ambalang is survived by daughter Vilma Ausalin, her grandchildren, and students from the Gawad sa Manlilikha ng Bayan Apprenticeship Program, the NCCA said.

Coming from a family of weavers, Apuh Ambalang, as she was called in the community, learned the craft at a young age and was able to execute the most intricate designs.

She was respected for her commitment to safeguarding and promoting the Yakan textile weaving tradition, especially the colorful “tennun” or tapestry weave.

“I had the honor of meeting her in 2018. She was the inspiration for the OVP’s (Office of the Vice President) efforts to help link Yakan weavers directly to the market instead of going through intermediaries, and the construction of the Angat Buhay Weaving Center in Lamitan,” Robredo recalled in a statement on Friday.

“Through these projects, we hope that Apuh Ambalang’s craft will continue to be practiced by her community, preserving one of the finest weaving traditions in the world,” she added.

Basilan Rep. Mujiv Hataman lamented that “one pillar of culture, tradition and arts left us, [had] left the Filipinos.”

Isabela City tourism officer Claudio Ramos II said Ausalin “has joined the roster of great Filipinos who left a torch of legacy on our heritage, which we hope we can continue in the years to come.”