Police warn Canada protesters of ‘imminent’ action to clear them 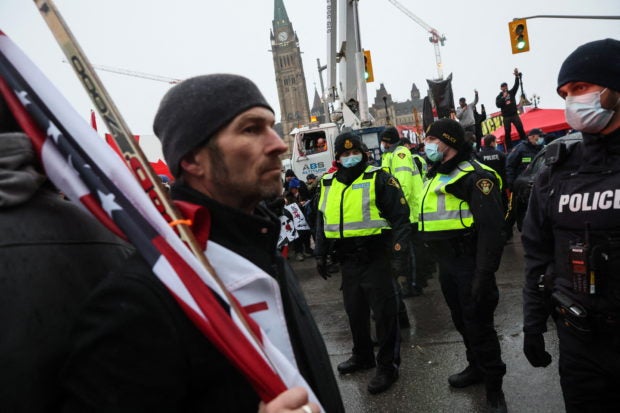 Police officers stand as other police detain a man who had been occupying a car around parked trucks and demonstrators, as protests against coronavirus disease (COVID-19) vaccine mandates continue, near the Parliament of Canada in Ottawa, Ontario, Canada, February 17, 2022. REUTERS/Shannon Stapleton

OTTAWA — Police warned protesters occupying central Ottawa on Thursday of “imminent” action to clear them from the capital and end a crisis that Canadian Prime Minister Justin Trudeau warned was threatening public safety.

Truckers opposing coronavirus mandates have blocked roads in downtown Ottawa for nearly three weeks, the centrepiece of a movement that has inspired anti-government protests in other countries and temporarily shut border crossings with the United States.

Threats of fines and jail helped convince protesters to retreat this week from four U.S. border points. Police have issued similar warnings in Ottawa, where Interim Police Chief Steve Bell said they were committed to driving protesters out.

“We’ve been bolstering our resources, developing clear plans and preparing to take action. The action is imminent,” Bell told reporters.

“To those engaged in the unlawful protests – if you want to leave under your own terms, now is the time to do it,” Bell said. “It’s time to go. Your time in our city has come to an end and you must leave.”

Bell’s comments added to stark police warnings that have drawn defiance by protesters, who honked their horns in unison earlier on Thursday in violation of a court order. Others shrugged off the warnings and soaked in a portable hot tub set up near government buildings.

“I ain’t going anywhere,” said Pat King, one of the organizers of the protest. “I haven’t overstayed my welcome. My taxes paid for me to be here.”

Police said they would restrict access to downtown Ottawa and that officers had begun erecting barriers around government buildings. They have also distributed leaflets warning truck drivers and others of “severe penalties”.

While officers have not physically removed people, the increased police presence has demonstrators bracing for action and urging one another to remain calm.

“If the police escalate, we’re not going to escalate,” said Chris Dacey, who says he has been at the protests every day since they started on Jan. 28. “We’re not going to respond to any type of aggression … We’re here (until) the prime minister talks to us.”

Inclement weather could potentially complicate any policing action. Snow was expected Thursday in Ottawa and could bring up to 12 inches (30 cm) by Friday morning, Environment Canada said.

Some 400 vehicles are parked outside of parliament and the prime minister’s office, paralyzing downtown. Calling the blockades a threat to democracy, Trudeau invoked emergency measures on Monday giving his government temporary powers to clamp them down.

The demonstrators initially protested against cross-border COVID-19 vaccine mandates for truckers and other restrictions. But they have made clear their opposition to Trudeau and some say they want to kick him out of office.

Canadian officials have warned of extremist elements present among demonstrators who they say want to overthrow the government. But Trudeau toned down his rhetoric in remarks to lawmakers on Thursday.

“Canadians continue to have the right to free expression, the right to protest peacefully, but occupying the downtown of our major cities, protesting and blocking border crossings is unacceptable,” he said.

In an open letter to politicians, the organizers of the self-styled “Freedom Convoy” told Trudeau’s government: “End the mandates, end the vaccine passports. This is why we are here.”

Protesters had earlier blocked Ontario’s Ambassador Bridge to Detroit, a vital trade route that is North America’s busiest land border crossing. Before being cleared on Sunday, the bridge blockade had damaged U.S.-Canada trade.

“(The) kind of conduct that we have seen at our borders puts into serious question the integrity and the security of this country,” Public Safety Minister Marco Mendicino told the House of Commons.

Police in Windsor, Ontario said they had foiled a suspected attempt to re-establish barriers near the bridge earlier this week. And in Ottawa, authorities have received reinforcements from the Royal Canadian Mounted Police, with more officers expected.

One Ottawa protester predicted demonstrations would continue even if police tried to clear them out and make arrests.

“I imagine most people are going to kneel down and stay peaceful,” said Sean, who declined to give his last name. “Nobody’s going to fight, nobody’s going to get violent if they need to be arrested.”