Jalosjos: Where angels fear to tread 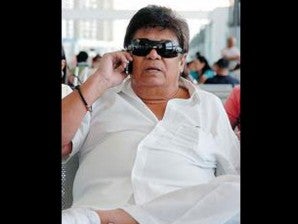 ‘TALK TO ME, LEILA.’ Former Zamboanga del Norte Rep. Romeo Jalosjos wants to meet up with Justice Secretary Leila de Lima to talk about the declining earnings of his bakery in the state penitentiary, among other concerns. Jalosjos was a former VIP-detainee at the New Bilibid Prison. INQUIRER FILE PHOTO

In the world of VIPs at the New Bilibid Prison (NBP) in Muntinlupa City, some are “higher than angels.”

And they apparently include former Zamboanga del Norte Rep. Romeo Jalosjos, who was convicted of child rape and sentenced to life, but was freed after only 12 years in prison.

Jalosjos on Thursday showed up at the Department of Justice in Manila but initially refused to reveal the purpose of his visit.

Eventually, however, he admitted that he wanted to see Justice Secretary Leila de Lima to complain about the declining earnings of his bakery in the state penitentiary, as a result, he said, of the current security issues there.

While in prison, Jalosjos was allowed by the Bureau of Corrections (BuCor) to build various structures in the maximum security compound, such as a tennis court, a playground, a basketball court, a bakery and his own kubol (cubicle or cottage).

He also put up another bakery near the gate of Katarungan Village, a private subdivision where he stayed for several months before his actual release from prison.

Speaking with reporters, Jalosjos defended the VIP treatment of wealthy convicts like himself, saying such arrangements had been observed in the penitentiary “since time immemorial.”

“I don’t see why we should insist on democratizing suffering—that if one suffers, all of us should suffer,” he said.

Jalosjos said that contrary to the notion that wealthy convicts had to bribe prison officials, he did not pay anyone for his privileges.

“The VIP treatment received by us was given by [the other] prisoners themselves. As in any place on earth and in heaven, they are not all the same. There are angels, and there are [those] higher than angels,” he said, adding:

Jalosjos warned that the planned demolition of all the kubol at the NBP would lead to chaos and riots between members of jail gangs.

He also expressed opposition to the idea that a retired military official should head the BuCor. He said the successor of its resigned chief, Ernesto Diokno, should be “a civilian with a background in psychology.”

Jalosjos said he wanted “to put some normalcy in the operations of the bakery so it would make a little money.”

He did not say how much his bakery had been making, but claimed that the amount was enough to finance “all the tuition requirements” of at least 50 children of poor convicts.

He ordered the bakery built near his kubol in 1994.

Jalosjos was convicted of raping an 11-year-old girl and sentenced to life imprisonment in 1997 by the Makati Regional Trial Court. He was later transferred to the NBP.

In April 2007, then President Gloria Macapagal-Arroyo granted his application for commutation of sentence to 16 years, three months and three days.

When he was released in March 2009, Jalosjos had served only 12 years in actual prison time.

On Thursday, she said she did not know that Jalosjos was coming over to see her.

De Lima said she was considering including former and current inmates in the technical working group to be formed in order to discuss the needed reforms at the penitentiary.

“I think their views or insights would be very helpful. Who else would be in the best position to tell us what’s happening [at the NBP]?” she said.

Asked if she would invite Jalosjos to join the technical working group, she said she would “think about it.”

At a press briefing, De Lima said the dismantling of kubol at the NBP would proceed.

“I am not changing my mind. The dismantling will continue,” she said, adding that what she was considering now was whether all the structures would be dismantled or some would be left intact to serve “legitimate purposes” such as conjugal visits.

Last week, De Lima said she was open to validating the advantages and disadvantages of having such structures in the NBP after prison gangs asked her to reconsider her decision. It was understood as a decision to halt the demolition of the structures.

She had earlier ordered the dismantling of the kubol after it was found that these had amenities markedly different from the ordinary quarters of the other prisoners.

De Lima said on Thursday that while the Philippine penal system was “reformative and rehabilitative,” prisoners were bound by rules and regulations.

“It should be balanced well. While we rehabilitate inmates, they should be governed by rules because precisely one of the reasons they are … confined is to discipline them and keep them from committing further malfeasance,” she said.

Asked to clarify why President Aquino canceled his “surprise” visit to the NBP on Wednesday, De Lima stood by her earlier explanation.

“I’d rather not comment on that further. All I can say is what I said [on Wednesday] was the reason [Mr. Aquino canceled the visit]. So if the Palace knows another reason, I don’t know that anymore. That’s all I can say. I do not wish to further fuel any speculation,” she said.

De Lima had said the President canceled the visit because he was unwell.

But Edwin Lacierda, Mr. Aquino’s spokesperson, said the visit was called off because it had been leaked to the media.

The President was to have made the visit to see for himself the conditions at the penitentiary. With a report from Nikko Dizon