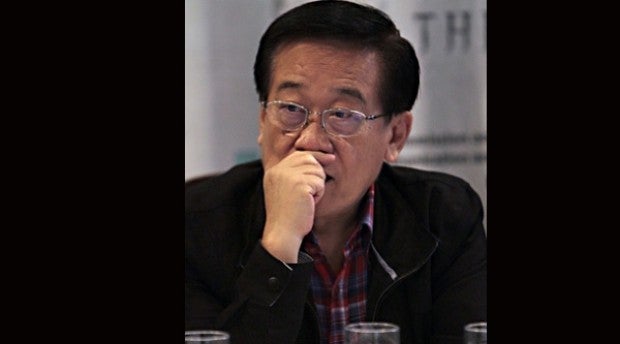 MANILA, Philippines — The Commission on Elections (Comelec) has no power to tear down campaign materials displayed by non-candidates in their private properties — even those posters that are over the prescribed sizes — without due process, a veteran election lawyer said on Wednesday.

“Comelec has no power to remove campaign materials posted by non-candidates on their private properties even if such materials do not comply with the size prescribed by the Comelec, without notice and hearing or without giving them the opportunity to be heard,” lawyer Romulo Macalinal said in a statement.

“The Comelec should immediately stop tearing down alleged oversized campaign materials posted on private properties with the consent of the owners who are non-candidates, without notice and hearing,” he added.

Macalintal made the statement following the so-called “Operation Baklas” which took place in Metro Manila.

Supporters of certain candidates said authorities removed their campaign materials despite it being displayed on a private property.

The lawyer, however, said that Comelec’s order is “untenable and unconstitutional,” pointing out that the materials are their property.

“It denied said non-candidates their fundamental right to due process,” he added. “The said campaign materials are properties of the owners and they cannot be deprived of their constitutional right to use it without due process.”

Macalintal, citing Supreme Court (SC) in the 2015 case of Timbol vs Comelec, said that while the poll body may have a motu proprio power, it could only be exercised after due notice and hearing.

The lawyer added that private citizens could contest the removal of campaign materials in their private properties.

“[N]on-candidates may challenge, refuse or should not allow anyone to remove their alleged oversized campaign materials posted on their own private properties without being given the opportunity to be heard since the size of said posters does not at all affect anyone’s constitutional rights nor does it endanger any state interest,”

Someone needs to be accountable

Senator Leila de Lima on Wednesday said someone needs to answer for the removal of campaign materials in a private property.

(They should answer and be held accountable for the removal of campaign posters in private property. Instead of spending their time removing campaign posters, they should remove the policies that impede the candidates and voters.)