Robredo assures Boracay IPs: If I get elected, you won’t be evicted, forsaken 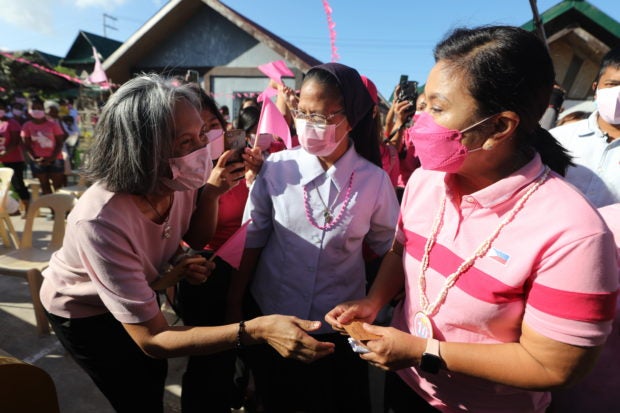 Members of the Ati community in Boracay declared their support for Vice President Leni Robredo’s presidential bid. Romalin Supetran, granddaughter of the village chief, recounted how the late DILG Secretary Jesse Robredo’s assistance was instrumental in preventing their eviction from their ancestral land. The Atis, who are native to the island, experienced eviction from their lands as the island’s tourism industry boomed. They also experienced harassment and difficulties in claiming their ancestral domain, which is being claimed by other parties. (VP Leni Media Bureau)

MANILA, Philippines — Vice President Leni Robredo has assured Indigenous Peoples (IPs) in Boracay Island that if she gets elected president, they would not be evicted or left behind by the national government.

During her visit to Malay’s Barangay Manocmanoc on Wednesday, Robredo told the Ati community that it is important to hear their concerns about possible development programs that would modernize Boracay Island. Residents would not be shortchanged — evicted from the island — in any decision-making.

IPs including the Ati tribe have not completely agreed with the national government’s plans to develop Boracay for tourism.

(For me, the reason why it is important for me to talk with you and hear the whole story, because my dream for IP communities is that number one, you can be assured that you can sleep every night with a peace of mind that you would not be evicted, that you would not worry about your houses and land being claimed by other people.)

Robredo also allayed fears that residents of the island will be driven away to make space for projects — saying that as long as she and her team are there, they would not allow it to happen.

(That’s why I am happy to see you today just to give an assurance that I will not leave you alone.  We know that you are facing difficulties right now, the tribal chieftain told me that there is still a pending case because some are trying to get your land.  But as long as we are here, we would not allow that.)

(My assurance also is if I am given the chance to be president, even if you are a minority, even if you are far away, the government would ensure that you are well-taken care of.  Thank you very much.)

Boracay’s modernization has been deemed a threat by local residents — including the possible development that would take place under the proposed Boracay Island Development Authority (Bida).

If Congress enacts House Bill No. 9286, the Bida, a government-owned and controlled corporation, will take the reins from the Boracay Inter-Agency Task Force (BIATF) and ensure sustainable development in the island.

Just recently, a group of Boracay residents and business owners have lauded the decision of Robredo and two other presidential candidates about opposing the Bida, which they said would be given “unbridled power” about land use.

But aside from eviction and being left behind, Robredo also emphasized that it is important for the Ati people to keep their culture, as they have been inhabiting the island long before Boracay became a tourist destination.

(We would ensure that your culture would not disappear.  There are instances, especially in Boracay which is swarmed by tourists, that the land given to residents is small.  The 2.1 hectares is a small parcel compared to the swath of land that is available.)

(But sometimes people fail to see behind that, that they are thinking that the 2.1 hectares being left to residents is a waste as it can be used for business.  What they don’t think about is that your culture is more important than any other business, as your culture — and taking care of it — is part of our being Filipino.)

Robredo is currently on the last leg of her Western Visayas tour, which kicked off on Tuesday with her visit of Roxas City in Capiz and Kalibo in Aklan.  By Wednesday afternoon, she is expected to visit Antique towns for other meetings.