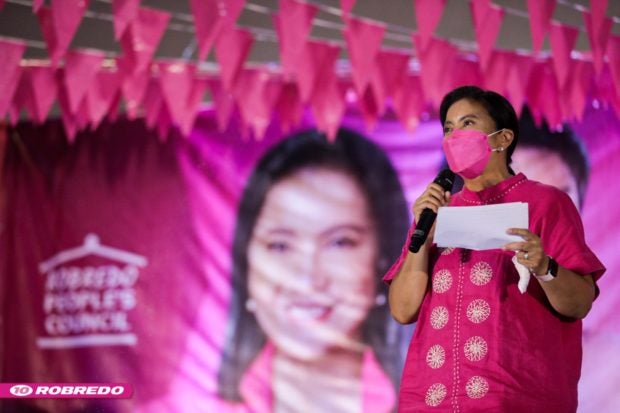 MANILA, Philippines — Vice President Leni Robredo, a contender in this year’s presidential race, on Tuesday headed to Roxas City in Capiz where she shared her vision of what a government should be and reminded the public about what is really at stake on May 9.

(I have a belief, the election is not the same as before, it is no longer just a contest between candidates. This election, we will decide: what kind of government do we really want in the next six years?)

(We don’t want too much politics. What we want is after the election, politics is over, it’s time to serve, it’s no longer about the color or party.)

Robredo visited Roxas City to kick off her two-day tour of Panay Island.

‘Her record is clean’

During Tuesday’s event, Roxas City Mayor Ronnie Dadivas said Robredo got the support of more than 50,000 residents during the vice presidential race in 2016.

“In the span of six years of her service, her record is clean. There is no hint of corruption. It is guaranteed that she can be trusted and that she cares for us,” the mayor said in Ilonggo.

Robredo also looked back on the support she received from the city in 2016.

(I am always happy when I am able to come to Roxas City and the rest of Capiz. There are a lot of good memories. The first time I visited, I was running for vice president. Nobody knew who I was when I first visited. I just introduced myself then but you helped me a lot during the election.)

She also recalled her office’s “Angat Buhay” programs in the province of Capiz, such as the farm equipment given to the farmers of Panitan as well as the livelihood assistance given to fisherfolk in Roxas City.

The Office of the Vice President also extended relief efforts after Typhoon Ursula in 2019. Her office, she also said, had put up two community learning hubs in the city amid the COVID-19 pandemic and delivered personal protective equipment sets and medical supplies.

Dadivas affirmed this, saying Robredo is someone to rely on during a time of crisis.

“She is a woman who, at the time of crisis, we could rely on or lean on, from her quick response to typhoons up to her effective COVID-19 response,” he said.

Robredo: Election is about choosing the type of politics in next 6 years
Robredo denies claims of ‘dilawan’ return if elected president