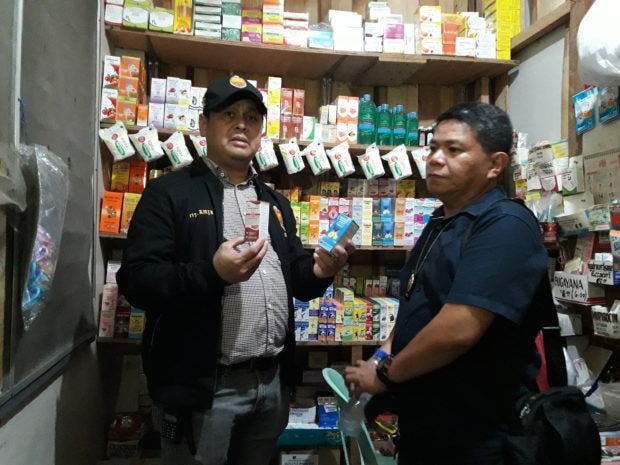 Abdul Jamal Dimaporo, the chief of the Iligan District Office of the National Bureau of Investigation (NBI), checks on boxes of medicines at a sari-sari store that authorities raided for selling “stolen” medicines on July 22, 2019, in Purok 9, Barangay Palao, Iligan City. (File photo by DIVINA M. SUSON / Inquirer Mindanao)

MANILA, Philippines — The Food and Drug Administration (FDA) plans to ask local governments to prohibit variety (sari-sari) stores from selling medicines to prevent the sale of fake ones.

FDA Deputy General Oscar Gutierrez mentioned the idea to President Rodrigo Duterte in the weekly taped “Talk to the People” briefing that aired late on Monday.

Gutierrez pointed out that local governments were the ones issuing sari-sari stores licenses to operate.

He proposed that they can pass an ordinance banning these stores from selling medicines.

According to him, Davao de Oro province already has such an ordinance.

In the meantime, Gutierrez called on Filipinos to buy medicines only from FDA-licensed drug stores — of which there were 45,000 nationwide.

Gutierrez reported that the FDA had investigated 185 sari-sari stores, 78 of which were found to be in violation of the Pharmacy Act.

Of the 78, nine were found to be selling fake medicines.

A total of 13 fake medicines, which are mostly COVID-related, were also found.

The FDA has also linked with online shopping sites such as Lazada and Shopee to determine violations in marketing the fake medicines using the platforms, Gutierrez said.

For his part, Interior Secretary Eduardo Ano said he would issue a memorandum circular “to have this campaign against selling fake medicines [stopped] up to the level of sari-sari stores.”

“They are dangerous to the health of our constituents,” he added.