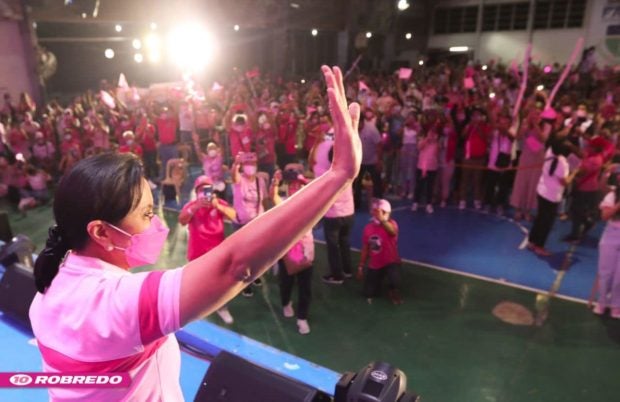 Vice Presidet Leni Robredo waves to her supporters during her campaign sortie in Batangas. Image from Facebook / VP Leni Robredo

MANILA, Philippines — Supporters of presidential aspirant Vice President Leni Robredo called on the Commission on Elections (Comelec) to address poll-related violence that victimizing most of their volunteers.

Robredo supporters said most of them complained of facing harassment, violence, and intimidation especially during campaign sorties in the bailiwick of rival candidates.

Team Leni Robredo (TLR), the volunteer arm of the people’s campaign for Robredo’s bid for the presidency, said this in a statement on Monday, after condemning attacks and violence among its members.

“TLR strongly condemns these attacks against our volunteers and calls on the Commission on Elections (Comelec) and authorities to take immediate action to protect our democratic values and electoral processes. Violence and intimidation have no place in a civilized world,” the group said.

The TLR cited incidents from several areas including Davao City where a man in his 40s threatened members of the group Youth For Leni. Another one was in Butuan, where a TLR-Butuan member’s car was thrashed and defaced by unknown perpetrator.

Meanwhile, TLR said that a volunteer from Teachers For Leni was also attacked with a knife by two men while chanting “BBM pa rin, BBM pa rin,” on Monday near the Leni-Kiko volunteer center in Katipunan, Quezon City.

(If we’re already seeing this kind of intimidation from the supporters of other candidates and only let it happen by the said candidates, it is sad to think that they will not take action to protect the human rights of the people if they are elected to government.)

TLR then called on its volunteers to exercise vigilance and exercise courage while doing volunteer work, assuring that it is already crafting a support program to aid volunteers in protecting themselves against acts of violence.

“Remember: People who resort to violence are no match for our courage,” said the group.

INQUIRER.net has sought a comment from the camp of Ferdinand Marcos Jr. regarding the incidents but has yet to reply, as of posting.