US to reopen Solomon Islands embassy after 29 years | Inquirer News 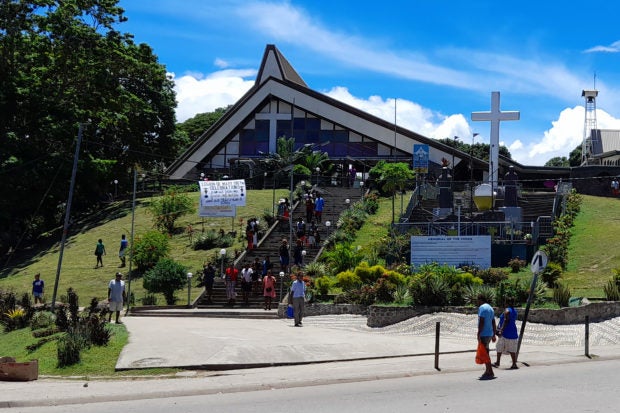 People attend church in Honiara on November 28, 2021, after calm returned to the Solomon Islands capital following days of rioting left at least three dead and reduced sections of the city to smoldering ruins. AFP

NADI, Fiji — The United States plans to re-establish an embassy in the Solomon Islands, a senior State Department official said Saturday, as Washington seeks to beef up its presence in a region where China is rapidly expanding its influence.

Secretary of State Antony Blinken is set to announce the opening of a new embassy on the Pacific island state during a visit to nearby Fiji — 29 years after the United States downgraded its diplomatic presence in Honiara.

The move comes just a few months after riots in the island chain of 800,000 people in November when protesters tried to storm parliament and then went on a three-day rampage, torching much of the capital Honiara’s Chinatown.

The unrest was sparked by opposition to veteran Prime Minister Manasseh Sogavare and partly fueled by poverty, unemployment and inter-island rivalries, but anti-China sentiment also played a role.

The United States closed its embassy in the Solomons Island capital in 1993 and is now represented by a consulate there, with an embassy in the Papua New Guinea capital of Port Moresby.

While in the Fijian city of Nadi, Blinken will hold a virtual meeting with leaders from around 18 Pacific island states as Washington seeks to up its diplomatic and security game in the region to blunt a push by China for a stronger presence of its own.

According to US officials, China has made a particular push to gain influence and a presence in a number of island countries in the region.

China said in December it would send police advisors and riot gear to the Solomon Islands as foreign peacekeepers began leaving the Pacific nation after being deployed during the deadly protests.

A subplot to November’s unrest was Sogavare’s efforts to forge closer ties with Beijing after abruptly breaking off the island’s long-time ties with Taiwan in 2019.

China baulks at any official exchanges between other countries and self-ruled Taiwan, which it sees as its own territory awaiting reunification.

The Solomons government said in December it had accepted Beijing’s offer of six “liaison officers” to train its police force and equipment including shields, helmets, batons and other “non-lethal” gear.

In recent years China has stepped up pressure to isolate Taiwan internationally, getting eight nations to switch diplomatic recognition from Taipei to Beijing since 2016.

A  diplomat at the US embassy in Port Moresby said the reopening of the mission in the Solomons Islands would build on US efforts to place more diplomatic staff throughout the region.

The aim was to “further engage with our Pacific neighbors, connect US programs and resources with needs on the ground, and build people-to-people ties,” the diplomat said.

The US government had provided vaccines and other help to Solomon Islands in combating the COVID-19 pandemic, the diplomat said.

The US Congress and the White House will need to approve the embassy proposal.

6.3 magnitude quake strikes off the coast of Solomon Islands