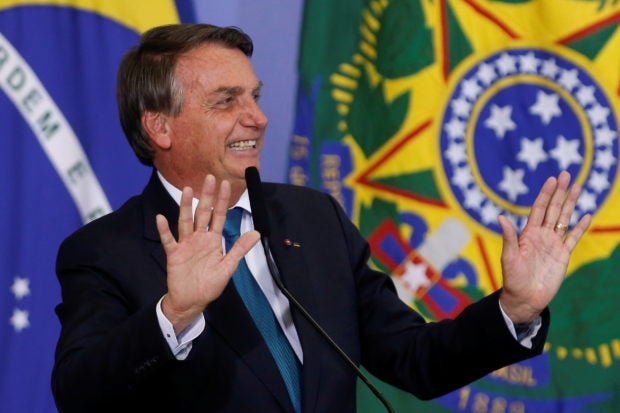 RIO DE JANEIRO — Ignoring US concerns, Brazilian President Jair Bolsonaro is due to arrive in Russia Tuesday for an official visit with highly awkward diplomatic timing, amid the tense standoff between Moscow and the West over Ukraine.

Brushing off pressure from traditional ally the United States and within his own cabinet, Bolsonaro decided to go ahead with meeting Russian counterpart Vladimir Putin, a visit he says is about building trade relations.

The far-right leader known as the “Tropical Trump” has dismissed fears that Putin could try to use the trip to claim support on Ukraine from Latin America’s biggest country, a non-permanent member of the UN Security Council.

But their meeting, scheduled for Wednesday, could become a diplomatic minefield for Bolsonaro if the subject veers away from bilateral ties.

“The timing is terrible,” said Guilherme Casaroes, a political analyst at the Getulio Vargas Foundation in Brazil.

“We don’t know what’s going happen. Things are going to be more and more intense at the (Russia-Ukraine) border,” he told AFP.

Russia made the invitation in late November, when tension over Ukraine was already building.

Bolsonaro accepted, deciding to combine it with a visit to fellow far-right leader Viktor Orban in Hungary, where he will travel Thursday.

Since then, the Ukraine standoff has only grown worse, with the risk of war in Europe looking all too real.

“The US exerted a lot of pressure on Brasilia to call off” the trip, said Felipe Loureiro, professor of international relations at the University of Sao Paulo.

But canceling now would send the signal that “Brazil is a puppet of the US,” and Putin “would get really pissed off,” he said.

Bolsonaro insisted again in a radio interview Saturday that he would go ahead with the visit, despite the prospect of war breaking out soon.

“We ask God that peace reign in the world, for the good of all of us,” Bolsonaro said.

Bolsonaro’s main reasons for making the trip appear to be domestic, said Casaroes.

The Brazilian leader’s approval rating is at an all-time low as he gears up to seek re-election in October, trailing badly in the polls to leftist ex-president Luiz Inacio Lula da Silva.

“Bolsonaro has practically nothing to show after three years (in office). Going to Russia right now is a sign of grandeur,” said Casaroes.

“He has antagonized the US, China, Europe. The only foreign power he could visit was Russia.”

The trip plays to Bolsonaro’s hardline base on the far right and Brazil’s powerful agribusiness lobby, he added.

Analysts say Bolsonaro may also be keen to cultivate ties with Putin for his own imminent battle, October’s elections.

Bolsonaro has hinted he will not leave the presidency without a fight, saying his reelection bid can only have three outcomes: “prison, death or victory.”

The trip “is completely related to Bolsonaro’s desire to disrupt the Brazilian election. We know Russia is very keen on cyber-attacks and disinformation,” said Loureiro.

Officially, the talks will focus on Russian investments in hydrocarbons and infrastructure in Brazil, as well as trade.

Though both countries are in the BRICS group of emerging powers (Brazil, Russia, India, China and South Africa), their trade ties are relatively tiny.

Brazil imports mainly fertilizer from Russia, and sells it beef, poultry, soy and coffee — though exports to the country represent just 0.74 percent of the Brazilian total.

The US even declared Brazil a “major non-NATO ally” in 2019.

But relations have grown chillier under Joe Biden, who has taken Bolsonaro to task over surging deforestation in the Amazon rainforest.

Communication channels between the Bolsonaro and Biden administrations are at a standstill, said Casaroes.

But Bolsonaro could pay a price if he antagonizes Brazil’s traditional allies during the trip.

“Bolsonaro is unpredictable. If he says something that somehow supports Russia, it would create a lot of problems for Brazil with Europe and especially the US,” said Loureiro.

The US urged Bolsonaro to tread carefully in Moscow.

“As democratic countries… we have a responsibility to stand up for democratic principles and for the rules-based order,” said US State Department spokesman Ned Price.

He added Washington was “confident that there will be discussions, both before and after the trip, with our Brazilian partners.”